Brickworld 2019: AFOL Designer launch and a bid farewell to the Bonahooms

Brickworld 2019, June 14-16, hosted another large contingent of AFOLs from around the USA and the world. It marked both the launch of the BrickLink and LEGO cooperative AFOL designer program, and also served as a farewell to Bryan and Kathie Bonahoom as primary organizers and proponents of the annual event. As usual, displays were plentiful and impressive as were the constant crowds passing among them. Nearly 9,000 convention-goers attended this year, including 1000 for the convention and 7600 of the general public for the expo. In addition to sponsorship, BrickLink participation focused on the launch of the AFOL Designers Program (ADP). Eliska and Larry joined with a smaller BL crew -- well, smaller than last year -- to share again a corner of the Schaumburg Renaissance Hotel Convention Center during the three-day show. BrickLink's Marvin Park and his three-member team were busy presenting featured designers from the ADP. The designer program has served as a launching pad for talented LEGO MOC designers, with the promise of marketing their sets to a wider audience. The program is a cooperative effort of both BrickLink and the LEGO group and has resulted in more than a dozen crowd-sourced and approved sets hitting the market. Three successful designers presented their work at a BL-sponsored AFOL session during BrickWorld. Later, several featured ADP sets were auctioned off at the annual charity fund raiser, with each signed set (signed by the set's designer as well as Eliska Jezkova, BrickLink, and Tormod Askildsen, the LEGO Group) helped to raise a record $27,000 this year for worthy causes.

We were honored to act again as sponsors of the event. In the Expo Area, Eliska again displayed her original front page MOC and memorial to her son, Dan Jezek, who founded BrickLink in June 2000 and who died in 2010.

This was our seventh BrickWorld, but it was Kathie and Bryan Bonahoom's 13th and last as the proprietors of the convention franchise. The couple, who founded BrickWorld along with Adam Reed Tucker back in 2007, are calling it a wrap. They are handing off ownership and running of BrickWorld to Mark Larson, another long-time builder and AFOL. It's quite a story, what this couple has done since BrickWorld was first launched. Although Bryan likes to say he only agreed to continue as chief director and organizer "for three years" obviously things happen on the way to that next bin full of bricks. The event grew exponentially forcing them to move the venue to the Schaumburg Rennaissance Hotel and the massive 100,000 sq. ft. convention center, which today seems just barely room enough.

A personal note: When Dan died in 2010 we remained rather busy for the next three years. Finally, in 2013, we were free enough to attend our first BrickWorld. Only then did we fully realize the impact Dan and his beloved BrickLink had on the AFOL community and the world of LEGO. And we have to say that Bryan and Kathie Bonahoom have been true professionals and wonderful hosts for the times we've managed to attend. We wish them well in their future endeavors and with their continuing dedication and love of BrickWorld and all things LEGO. They will certainly be missed, but always remembered for what they've accomplished and preserved for the entire LEGO community around the world to enjoy. 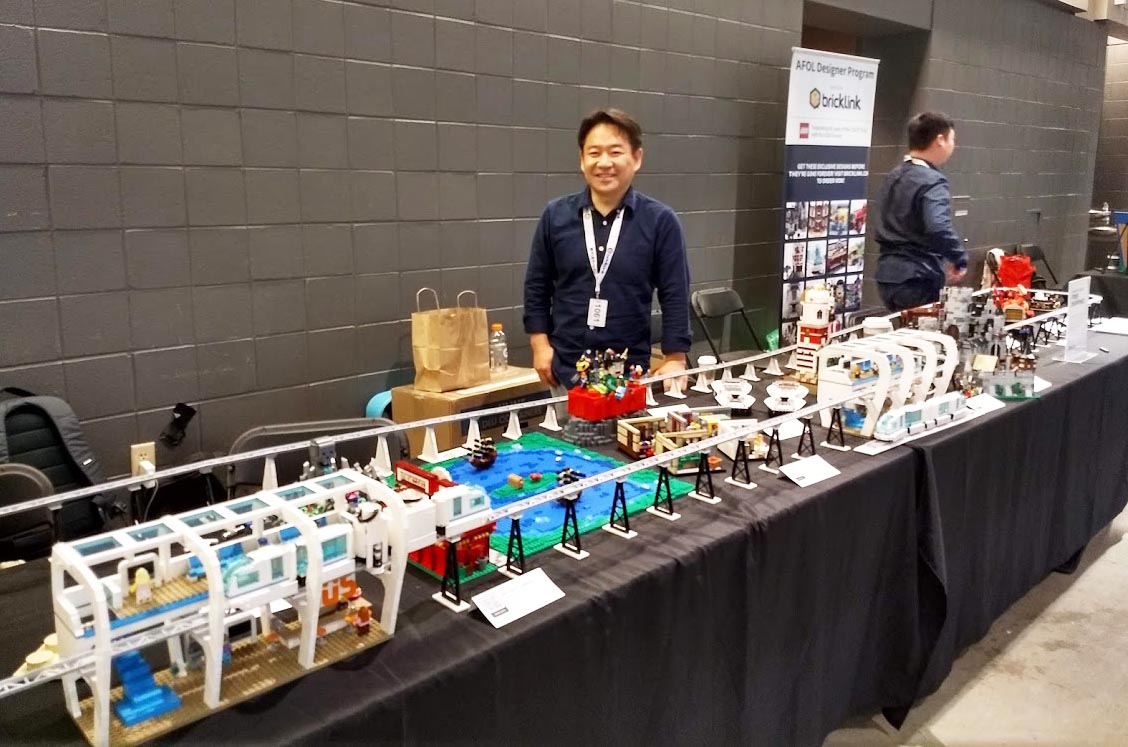 Marvin Park, CEO of BrickLink, looks over several winning entries in the BrickLink-LEGO Group sponsored AFOL Designer Program. These special sets were later auctioned off at the charity raffle to raise money for special causes. 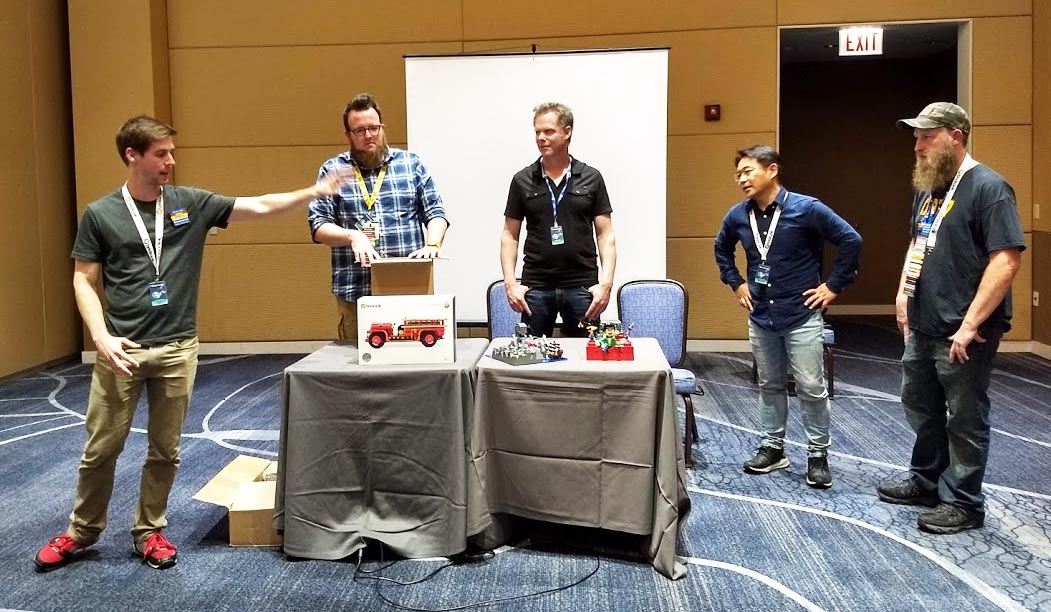 "The Texas Brick Railroad" by LEGO designers from the Lone Star State. 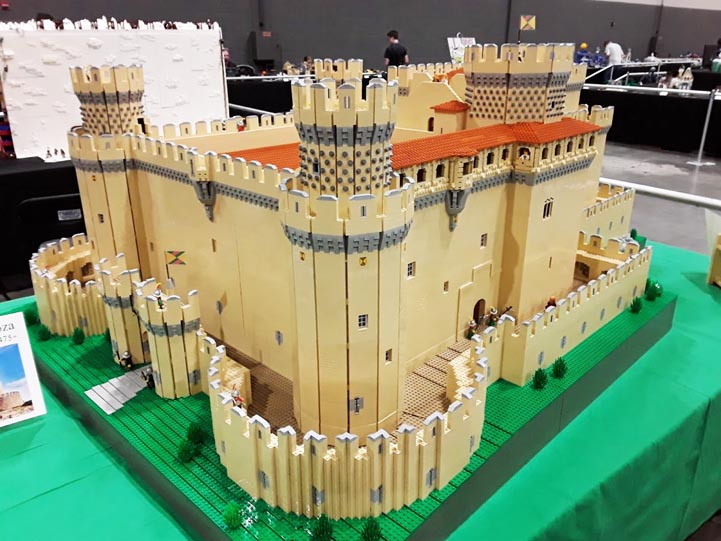 A castle MOC that attracted plenty of attention at BrickWorld 2019. It's called the "Mendoza Castle" modeled after an edifice in Spain.

We displayed Eliska's MOCs once again in tribute to her son Dan Jezek, founder of BrickLink. 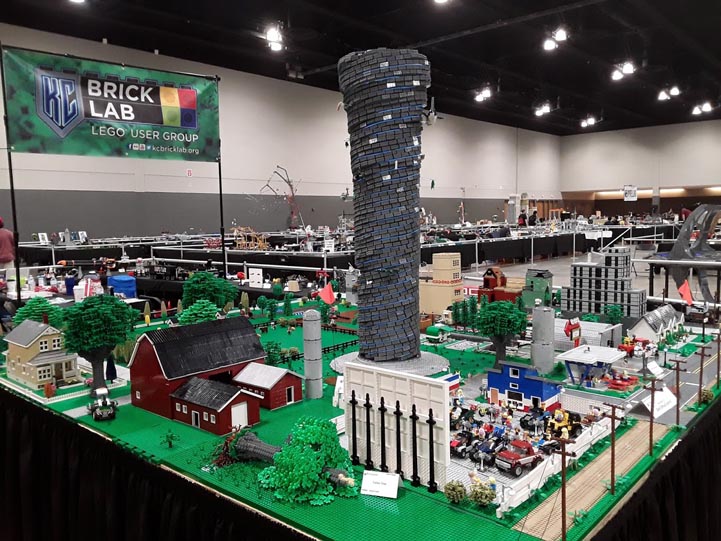 A City MOC with a tornado running through it.

Not exactly the Spanish Armada, but still an impressive array of sailing vessels gathered in a flotilla. 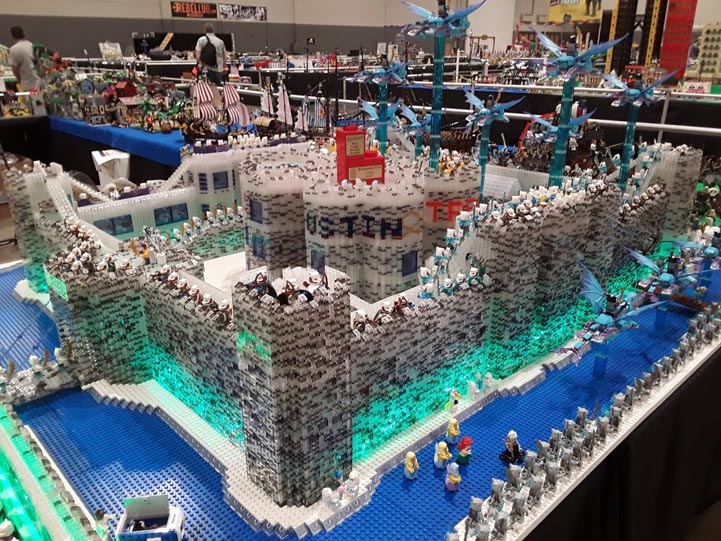 This model was named simply "Assembly of Hope" with huge aspirations of positive vibes and a lot of well-displayed designer skills. 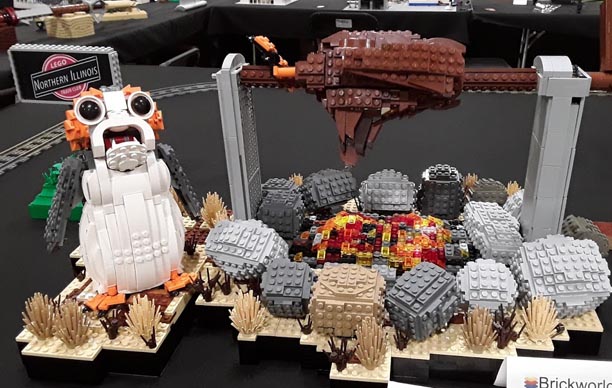 The humor in this MOC is very dry, as the "Roast Porg on a stick" is a play on words, but you get it, right? It did win the award for "Best Humor". 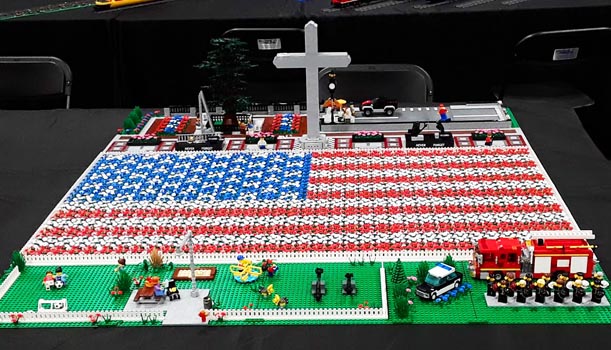 A patriotic memorial to those who served. 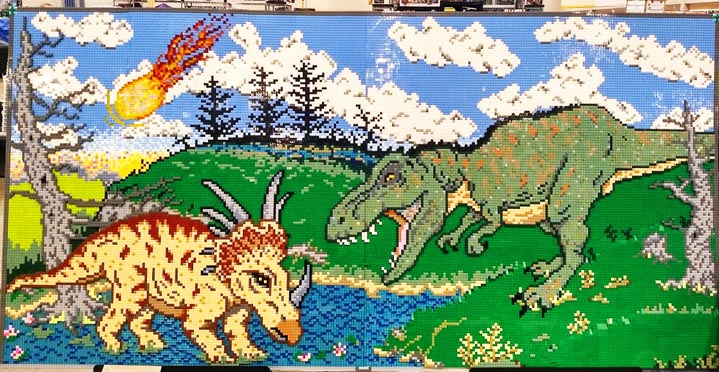 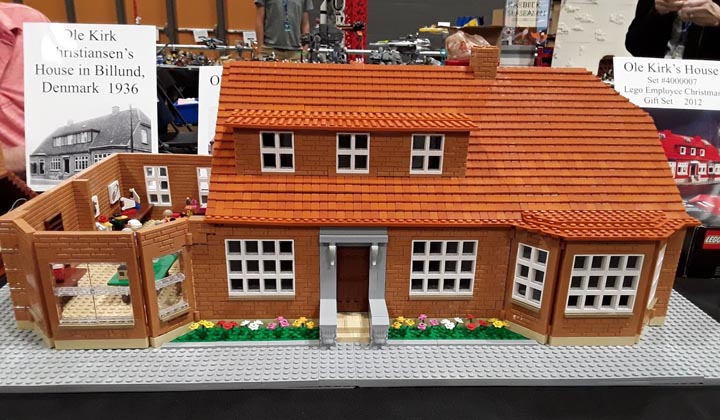 This is a personal riff MOC on the Ole Kirk Christiansen House, Billund, Denmark, built in 1936. 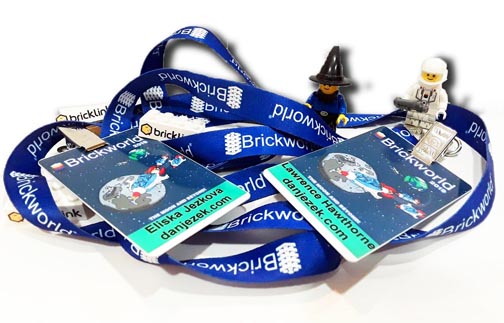 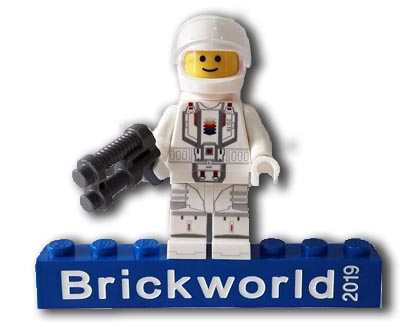 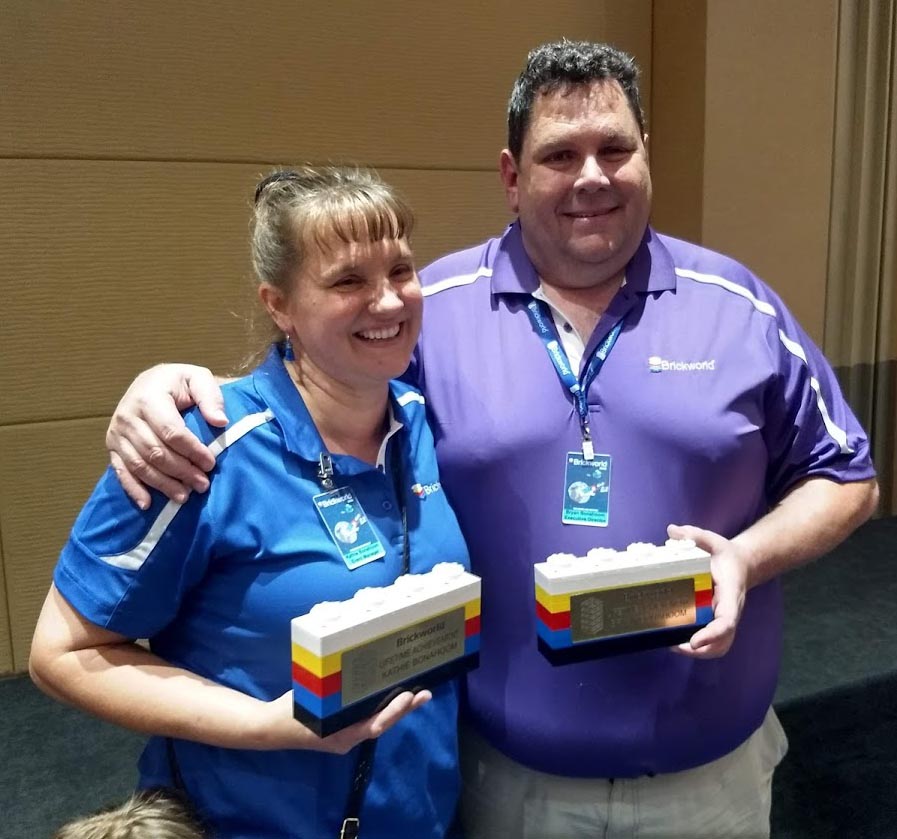 Kathie and Bryan Bonahoom said goodbye after 13 seasons of organizing and running the Brickworld franchise. Although this is their last rodeo in charge, they promised to be back next year in consultant roles at the LEGO event that they and Adam Reed Tucker began in 2007. 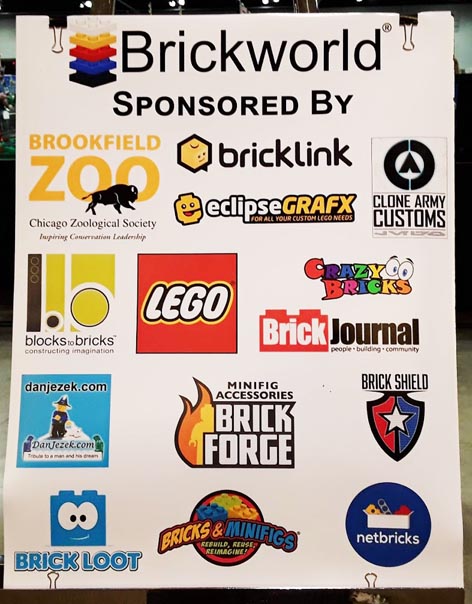 We were honored once again to serve as a Red Plate sponsor for Brickworld 2019. 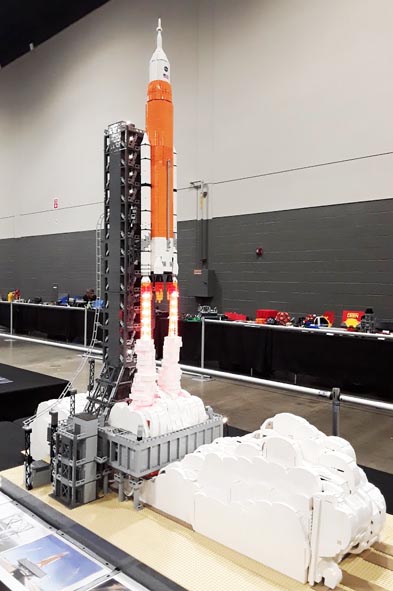 With the 50th anniversary of the Apollo moon landing this year, the space theme was well represented in creative design. Here is a LEGO rendition of the Space Shuttle. 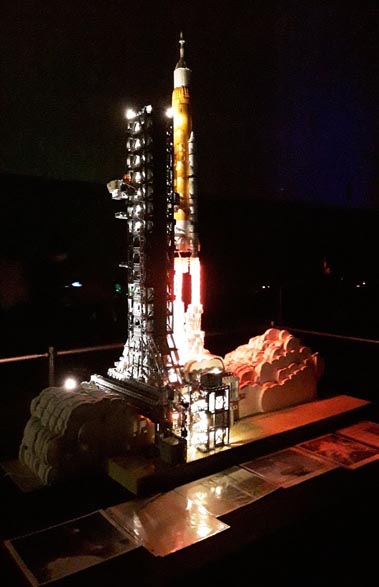 The Space Shuttle MOC as seen during BrickWorld After Dark. 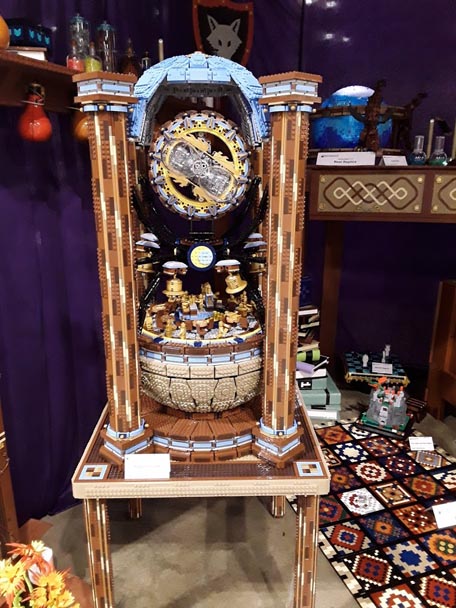 This Clock MOC is dealing in future time. 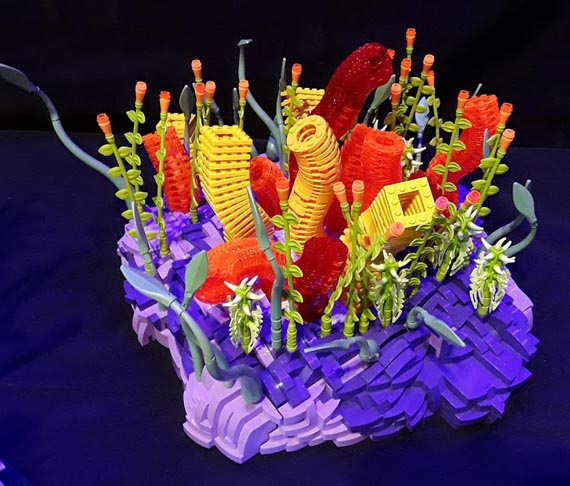 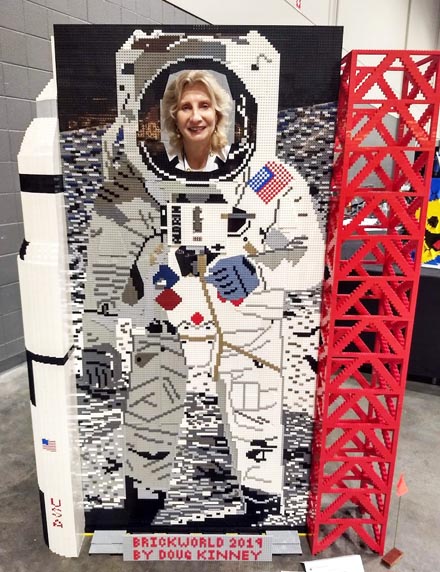 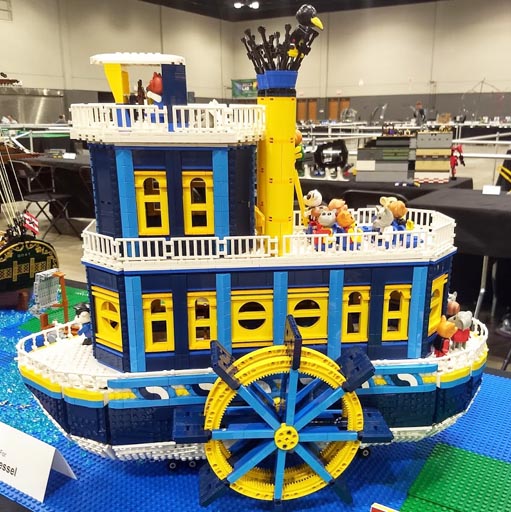 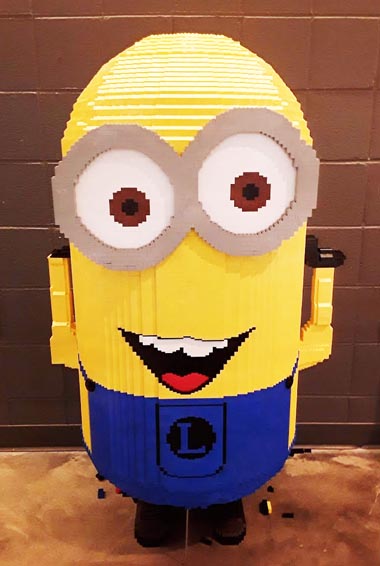 A large minifig with a big hello to AFOLs arriving to BrickWorld. 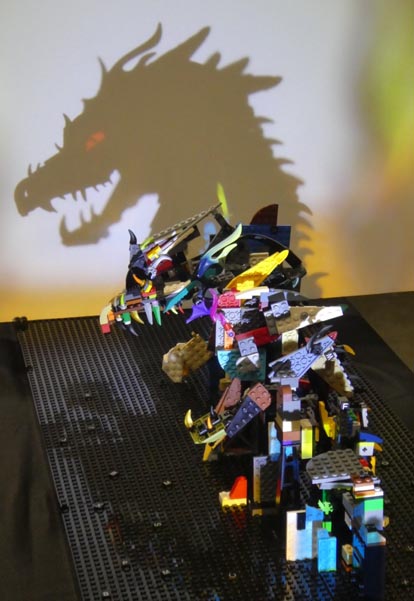 This major award winner was all about the shadow cast from a seemingly abstract gathering of bricks. 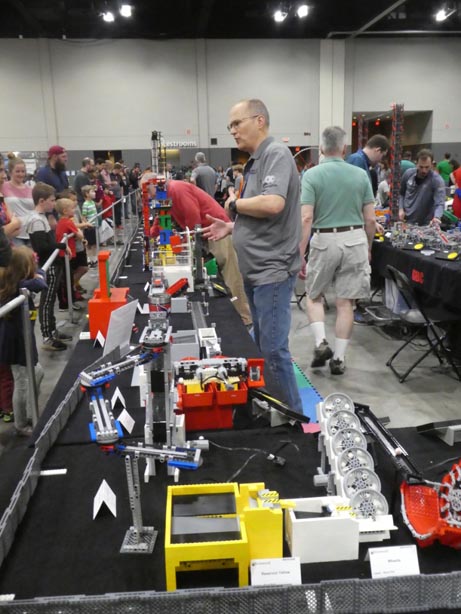 It would not be BrickWorld without a Great Ball Contraption, and here it is, and so it is. 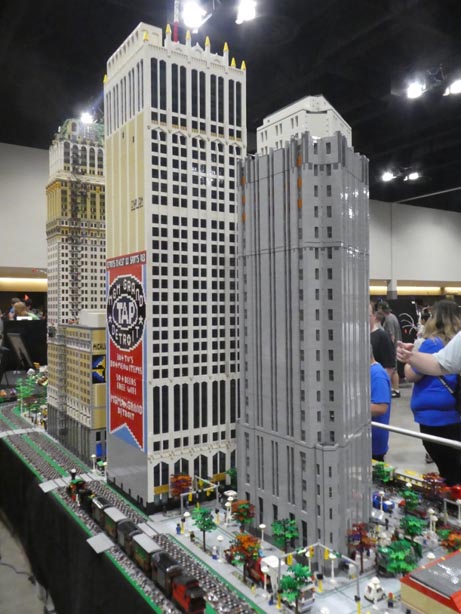 A bevy of skyscrapers graced many a citiscape at BrickWorld. 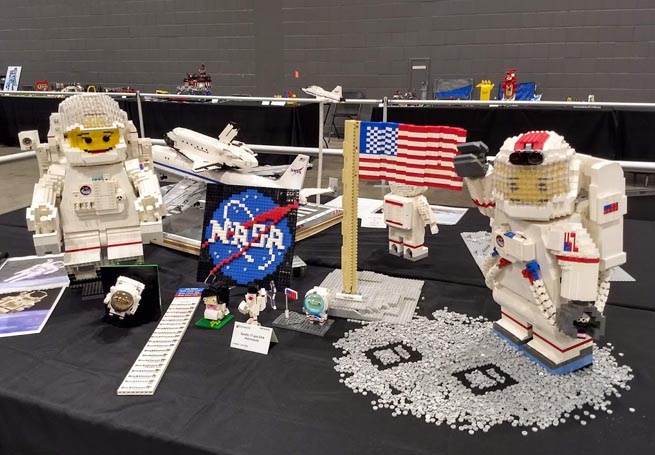