Trip to Billund, Denmark and the home of LEGO

Billund, Denmark is a veritable shrine to LEGO enthusiasts around the world. It's the home to LEGO House, as well as the world's first Legoland and design and manufacturing headquarters of the LEGO corporation itself. We had the honor to visit and tour most of these facilities recently.

The family-owned business, founded in Billund in 1932 by Ole Kirk Kristiansen, is today one of the largest manufacturers of children's play materials, i.e., LEGO bricks. We had an opportunity to tour the manufacturing plant, although photos were not allowed. A trip through the plant revealed a highly automated system producing every imaginable LEGO part. Heavy emphasis remains on quality control all guided by their world-renown motto of "Only the best is good enough." While there, we joined BrickLink's Jay Kim and Marvin Park during meetings and discussions with LEGO leading to their most recent announcement on the AFOL Designer Program, a major collaboration between BrickLink and LEGO now underway. 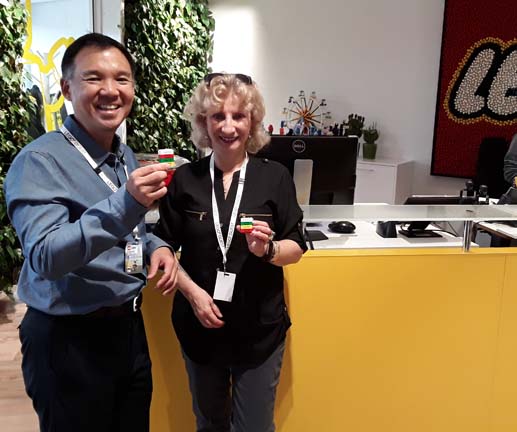 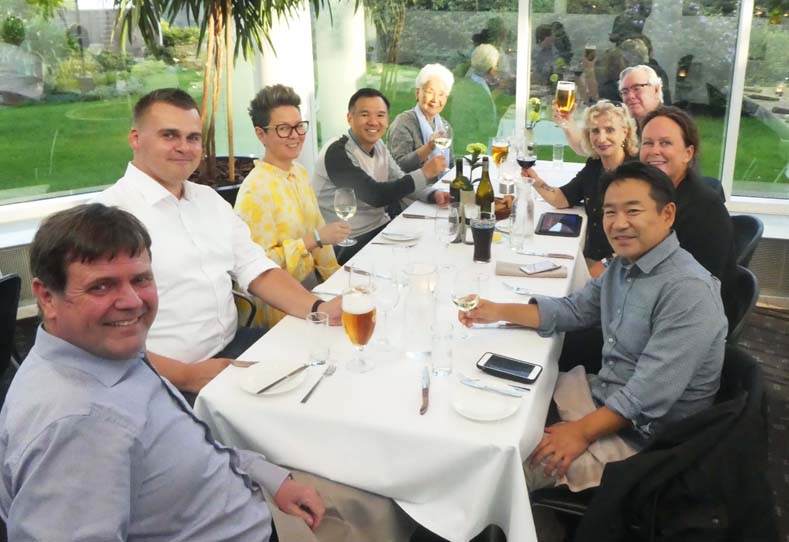 Dinner with LEGO staff gave us all a chance to share notes on future mutual endeavors between LEGO Group and BrickLink. The future of bricks, from the source in Billund to the online marketplace pages of BrickLink never looked so bright. 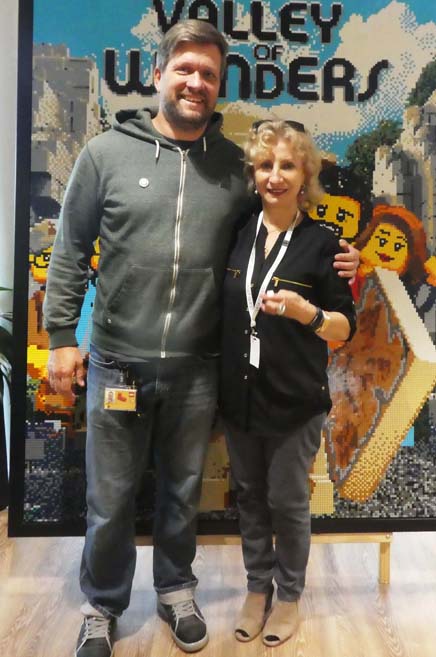 Kim Thomsen took us on an hour tour of the manufacturing plant in Billund. Although photos were not allowed, our mind's eye gave us plenty of information regarding the LEGO group's passion for efficiency and quality in everything they produce. As they say, "Only the best is good enough." 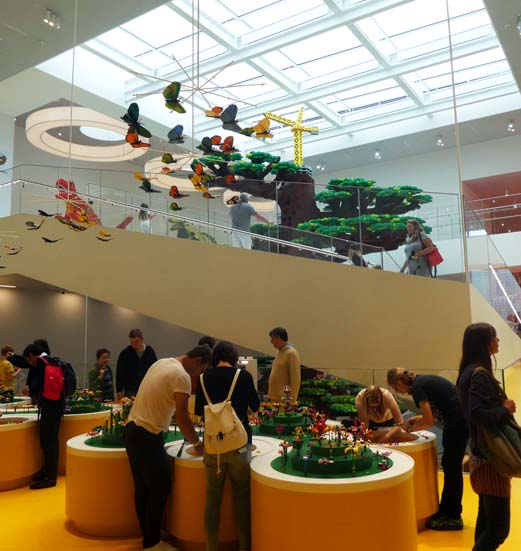 The top floor sunroof at LEGO House provides plenty of light to view the dinosaur exhibit and the final layer of the 50-foot-high Creativity Tree. 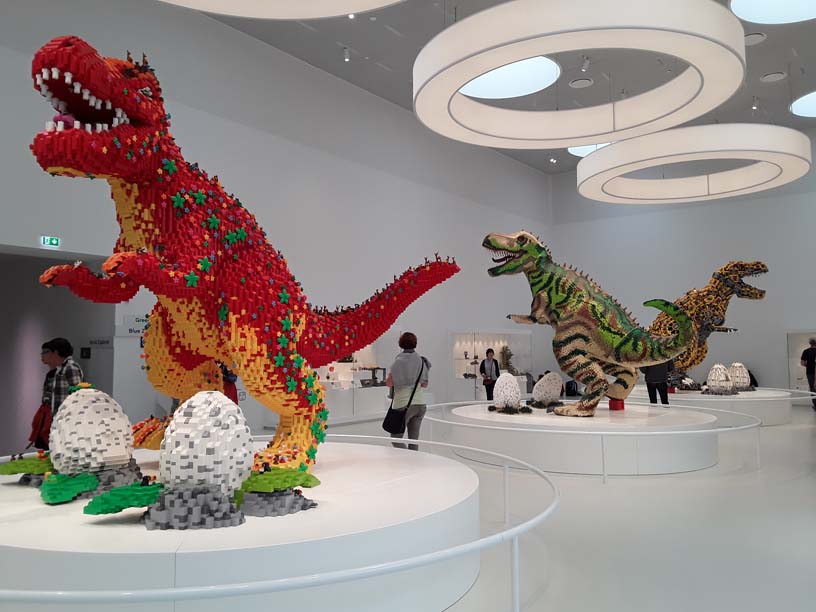 Three dinosaurs representing three styles of LEGO brick, Duplo in the foreground, followed by System and finally Technics in the rear. Click on each hotspot to see detailed enlargements of these impressive brick-by-brick creations.

The famous LEGO motto: 'Only the best is good enough!' Four generations of LEGO family patriarchs are part of the mural. 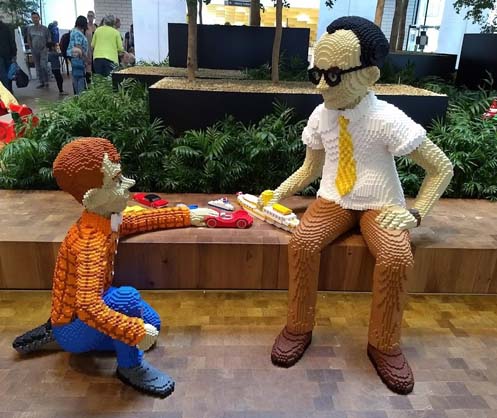 LEGO founders are preserved forever at Lego House in the reproductions from Lego bricks. 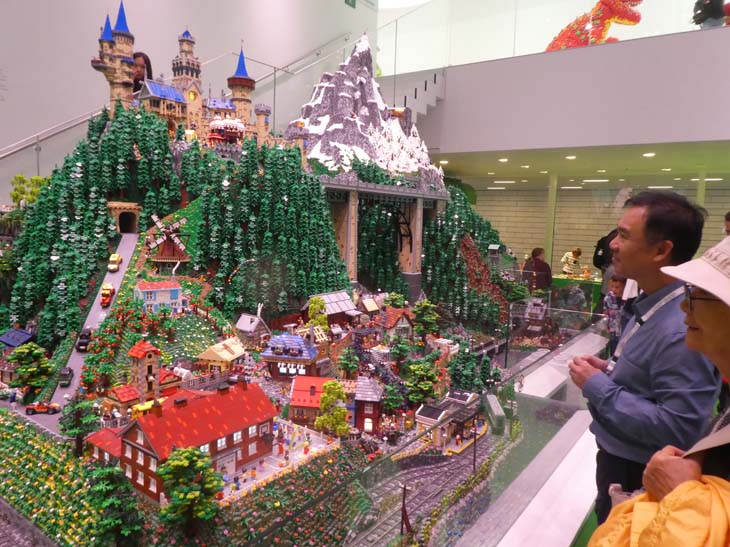 This Disney-style Fantasyland castle, with adjacent Matterhorn, is an impressive display at LEGO House.

A huge Cityscape made of thousands of bricks.

The museum in the basement of LEGO House is dedicated to the history of LEGO, how it moved from making wooden toys for kids, like this wooden duck, to the system of bricks and sets it designs and produces today. That shingle above the duck is the LEGO quality motto in Danish. 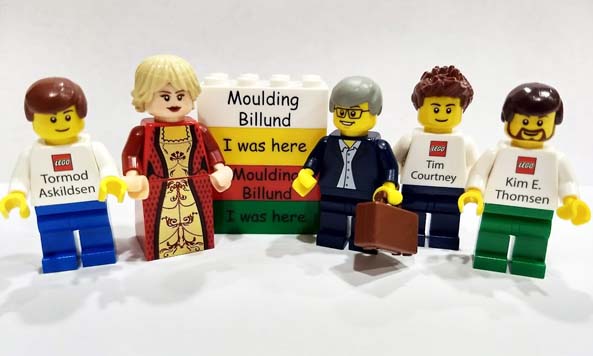 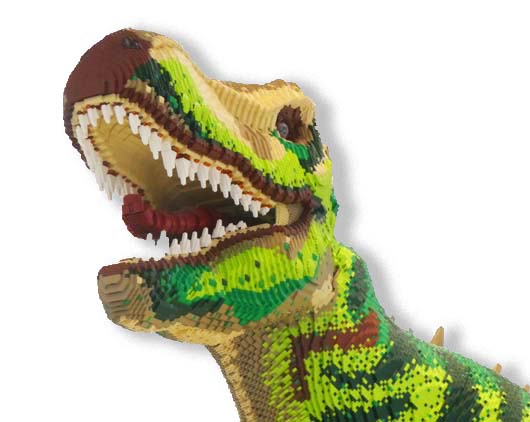 LEGO House, a testament to creativity 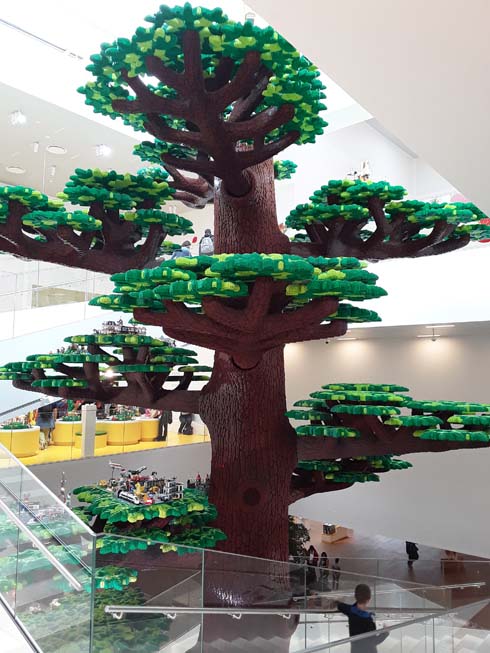 The 50-foot-high "Tree of Creativity" has become a major icon of the LEGO House in Billund, Denmark. 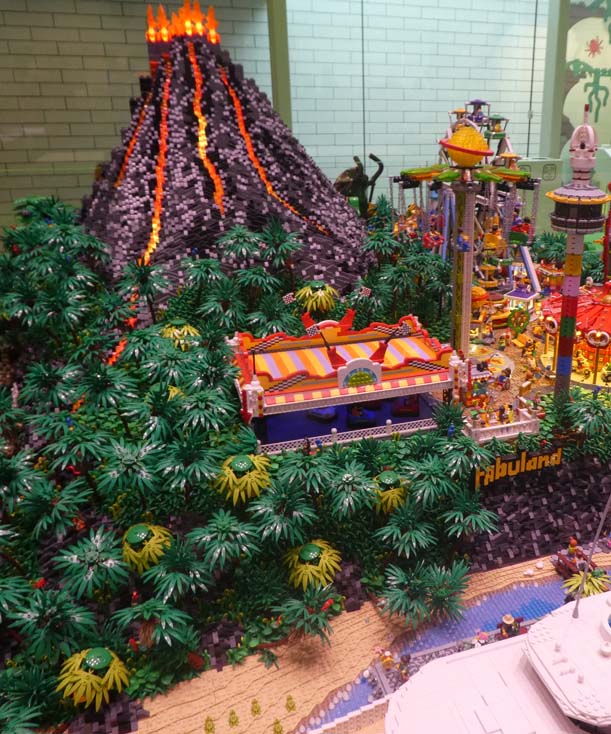 The Fabuland MOC with belching, erupting volcanos and massive greenery. 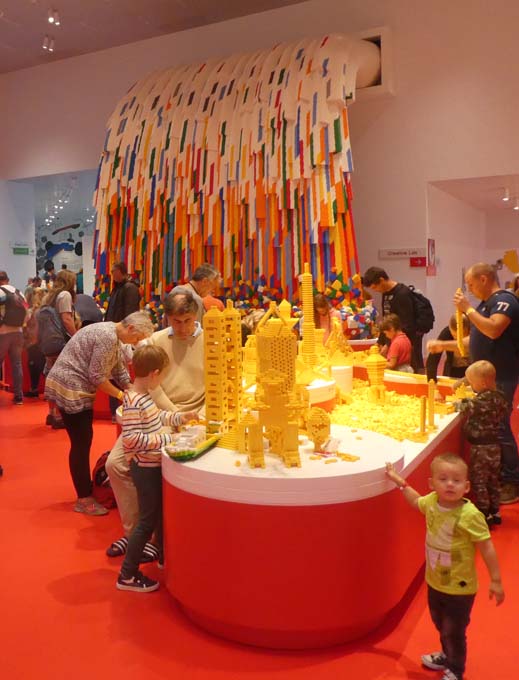 A cascade of color, all in LEGO brick. 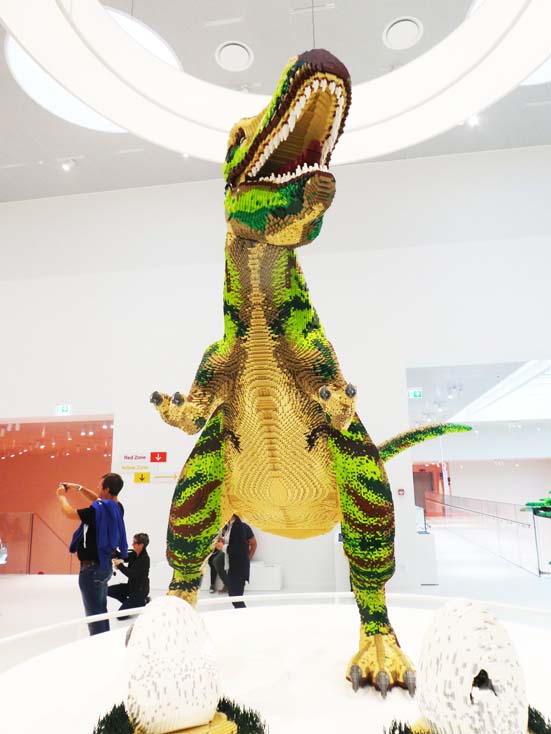 Don't get too close, kids. This System Dinosaur looks ready to bite. 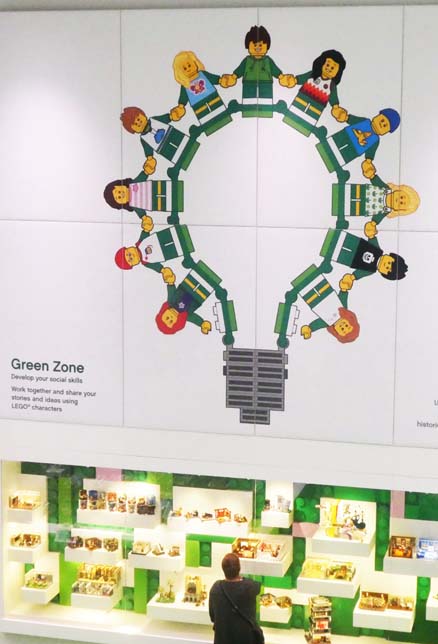 The 'Green Zone' is in keeping with LEGO House's themed areas. This one especially appealing to kids. 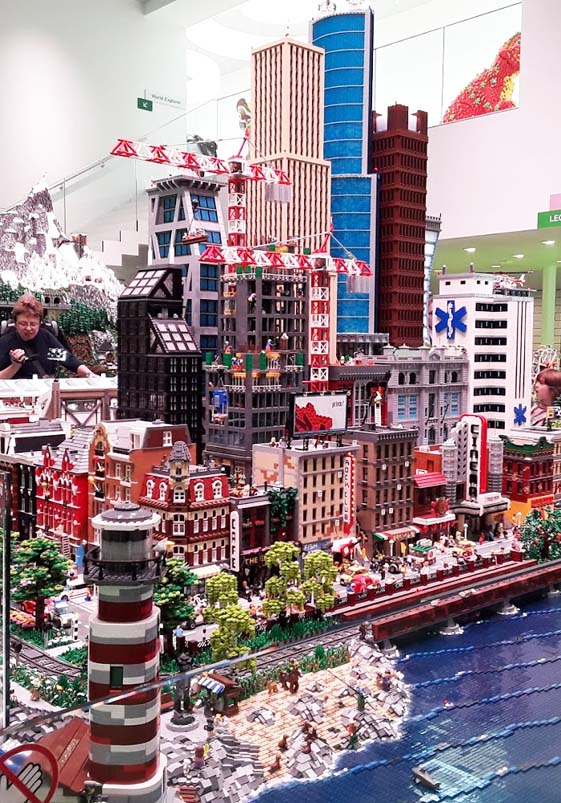 Cityscape was designed with intricate detail. 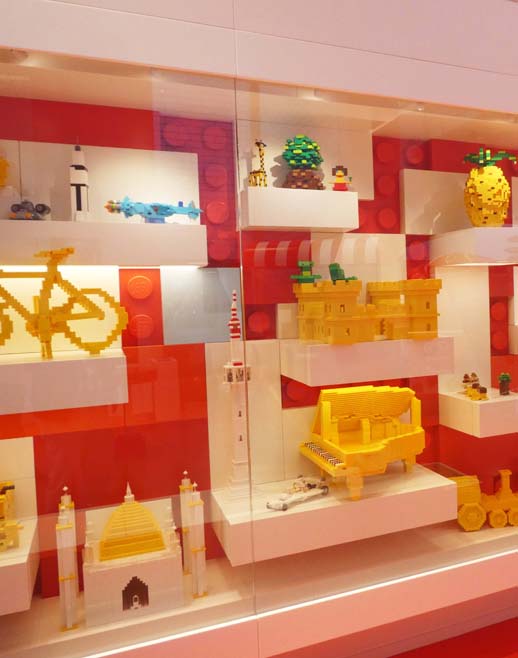 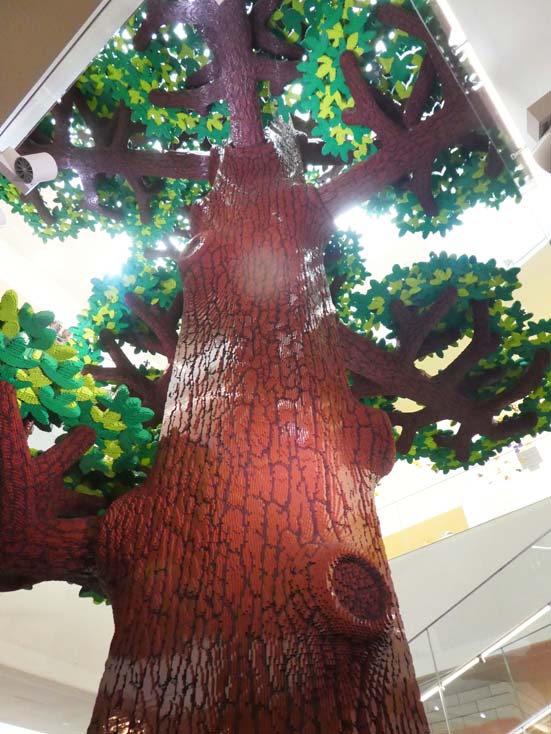 Another look up the Tree of Creativity. This creation dominates all of LEGO House. 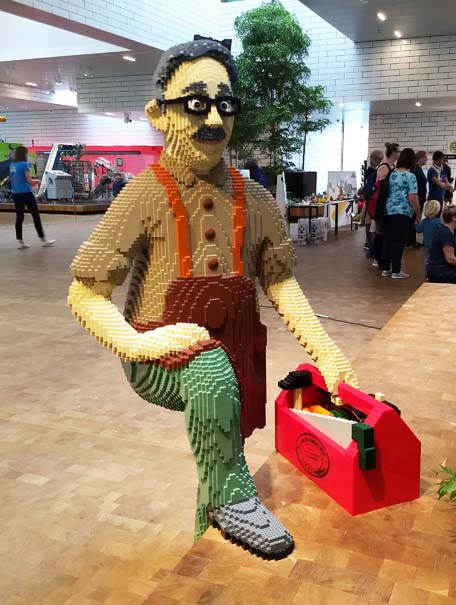 An early pioneer of LEGO is seen recreated in brick, on his way to work with toolbox ready to make more wooden toys for kids. 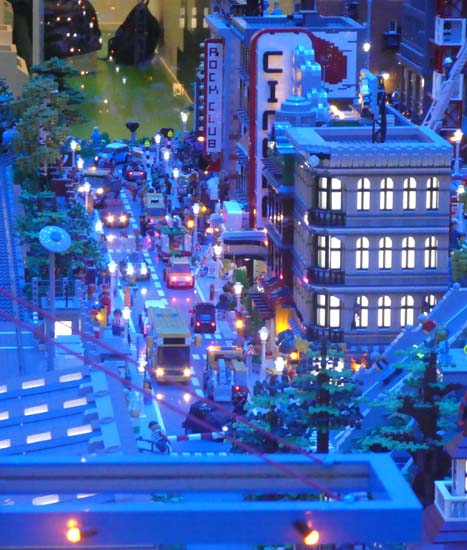 The 'City at Night' as seen during rotating lighting effects. 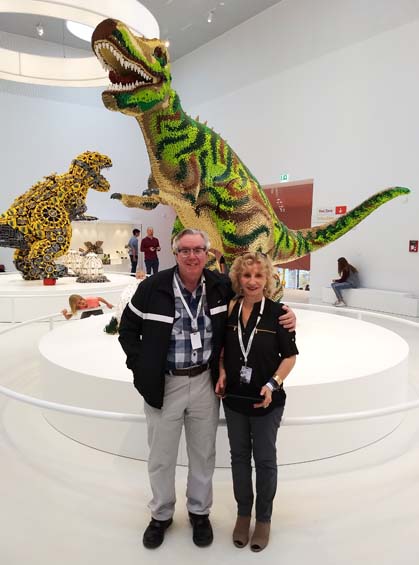 Larry and Eliska with the System Dinosaur on the top floor of LEGO House.