Brickworld 2018 staged another huge show, matching previous years in enthusiasm and substantially expanding the current AFOL cache of bulk LEGO. Displays were plentiful and impressive as were the constant crowds passing among them. And for us this year's event also represented a rare and welcomed chance to meet up again with the BrickLink crew in our shared corner of the Schaumburg Renaissance Hotel Convention Center. Happenstance dictated our location, adjacent to the BrickLink booth, where Marvin and his team were busy demonstrating the latest BL software and virtual reality features that kept both kids and adults enthralled as long as attention spans and a supply of BL T-shirts and other cool, and free, stuff would permit. During the "convention" portion of the proceedings, on Friday, we attended three separate sessions where BrickLink presented and live-streamed via Facebook. Those BrickLink presentations are available today on Youtube. Topics included the latest iteration of Stud.io software and future plans for expanding and modernizing BrickLink, including BrickLink eXpress (mobil) and a new MOC crowdfunding program called "Brickstarter".

Although hot, humid weather influenced sheer numbers -- this year attracting a slightly down-sized crowd of about 8,000 -- it did nothing to dampen enthusiastic waves of attending Chicago-area public visitors, exhibitors and vendors. The Friday night charity auction generated a hefty bottom line return of about $23,000 raised for worthy children's causes and programs, many involving LEGO. The annual bid-war to secure a copy of Eliska's replica of the original homepage was won, again, by BrickLink.com who added a $3,000 donation to the charitable total (Wink, wink . . . no one was surprised).

In the Expo Area, Eliska again displayed her original front page MOC and memorial to her son, Dan Jezek, who founded BrickLink in June 2000 and who died in 2010.

This year's expo, June 13-17, was marked by sharing experiences with AFOLs throughout the five-day convention. We were impressed, once again, by the impact Dan made during his time with us to inspire AFOLs around the world with his passion for BrickLink and love of all things LEGO. 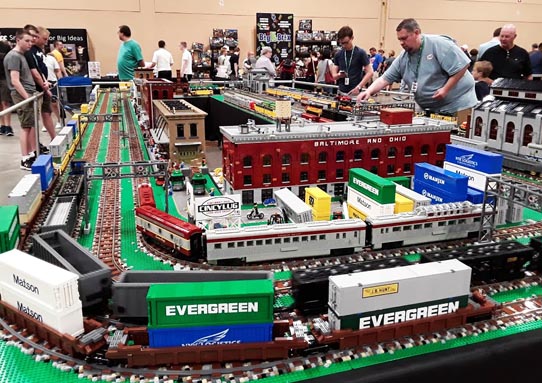 Would not be BrickWorld without a full contingent of trains and hobbyists to support them. 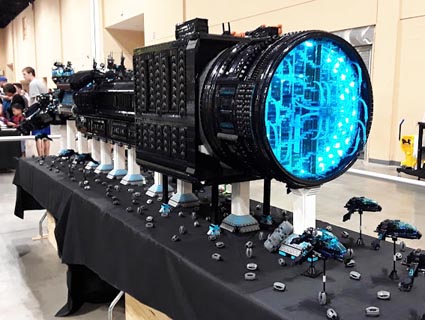 This MOC won the first-place prize for "Youth Creation". It's called "Gateway" and was built by Jordan. 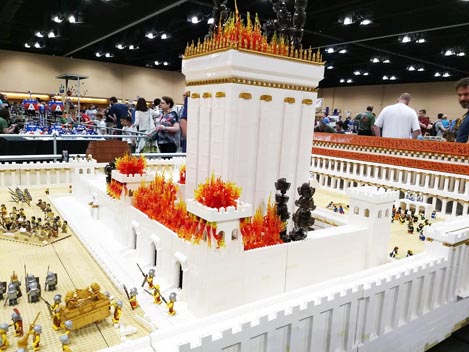 A castle MOC that attracted plenty of attention at BrickWorld 2018. It's called the "Second Temple of Jerusalem". 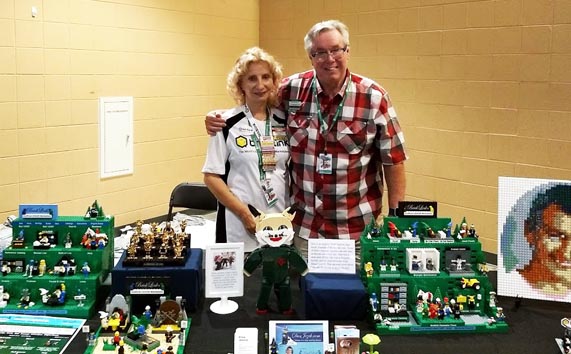 We displayed Eliska's MOCs once again in tribute to Dan Jezek. 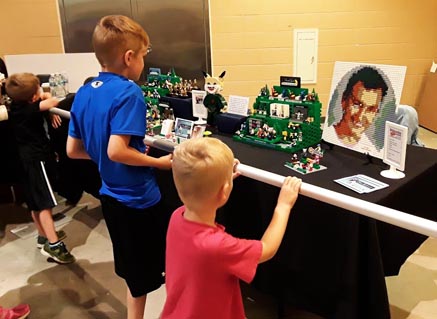 A number of children walked away from our table with plans to go home and reproduce what they had just seen for themselves. Hope they do!

Frozen-Arendelle Castle, an alpine redoubt, from the mountains to the sea, was replete with amazing detail and artistry. 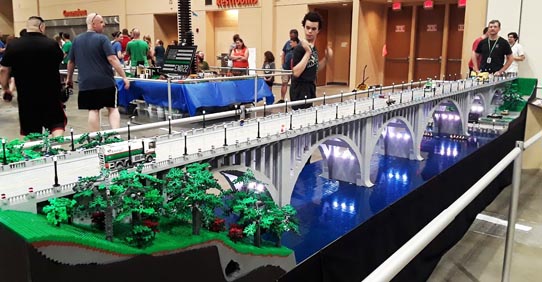 This model, a project of the Tennessee Valley LEGO Club, took 73,000 bricks and 300 hours to build. The MOC builder originally designed the project in CAD using blueprints from the Tennessee department of transportation. Quite a feat. 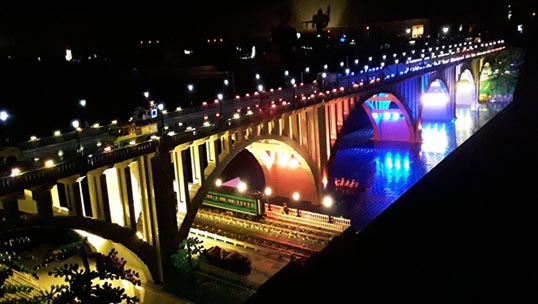 The bridge MOC above as seen during the late Saturday evening BrickWorld "World of Lights". It took 270 RGB LEDs, a thousand feet of wire and 15 electronic dimmer packs to do it. 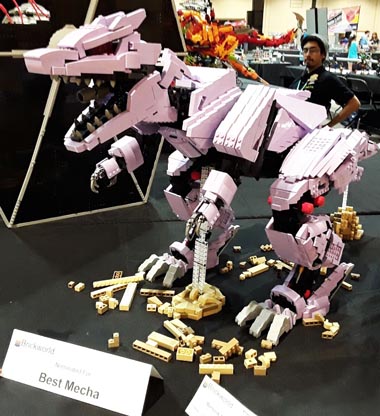 This T-Rex looks ready to rumble and was nominated for Mecha recognition in the annual awards competition. 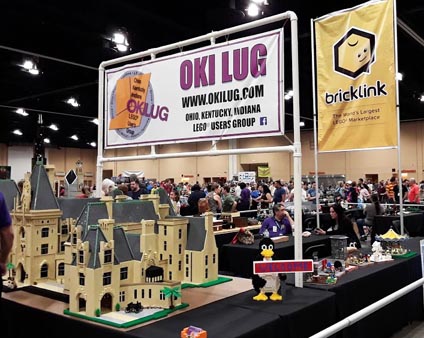 MOC builds by the Kentucky LUG. 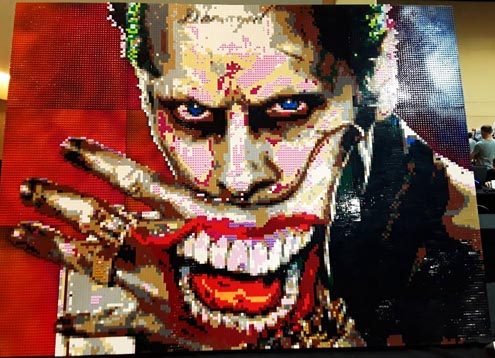 It was no joke, that this LEGO mosaic won first place for artwork. 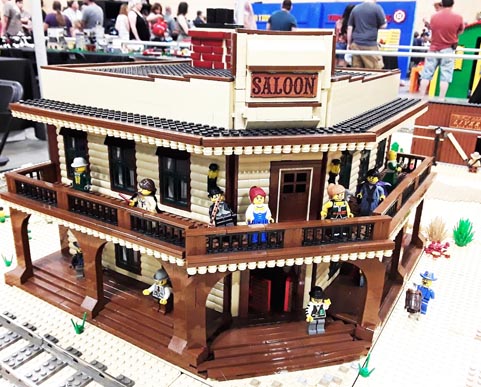 That looks like Miss Kitty on the upper veranda looking for Matt to return. 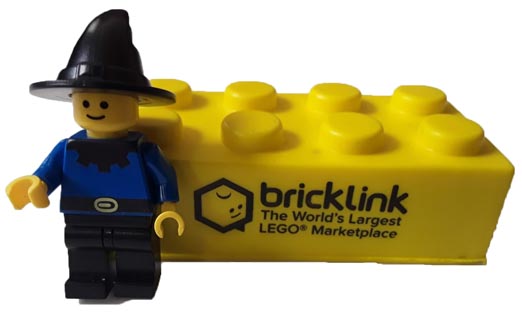 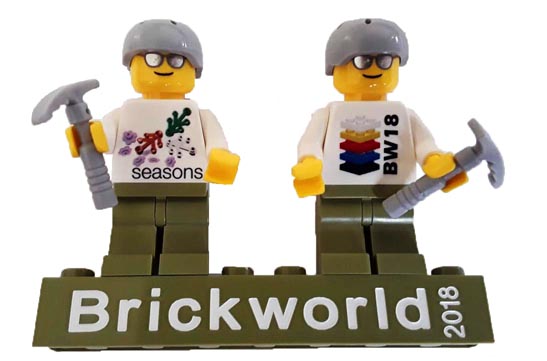 The 'Tree of Creativity' 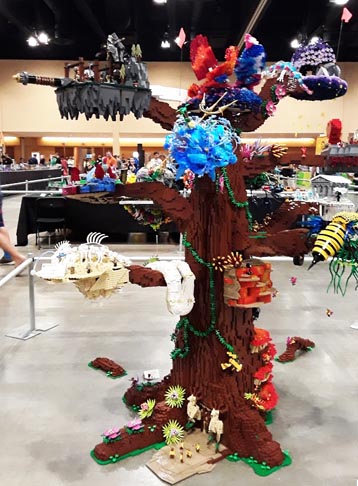 The 50-foot-high "Tree of Creativity" has become a major icon of the LEGO House in Billund, Denmark, and an inspired and scaled replica is seen here at BrickWorld 2018. 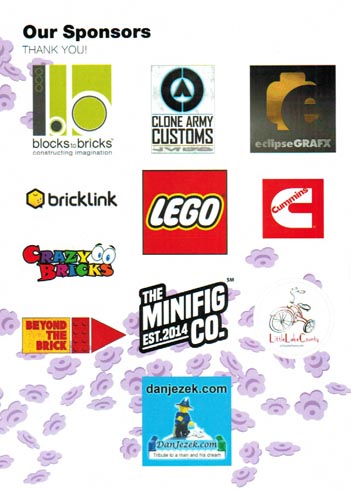 We were honored once again to serve as a Red Plate sponsor for Brickworld 2018. 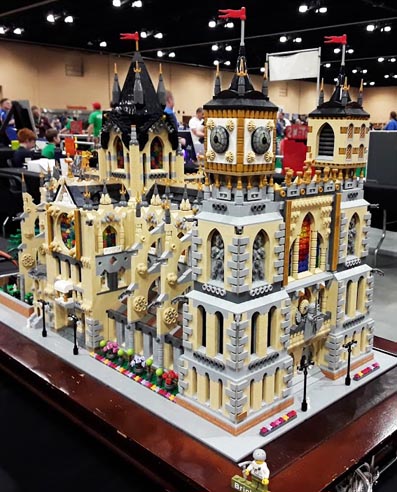 Springtime at the Cathedral of St. Michael the Archangel. 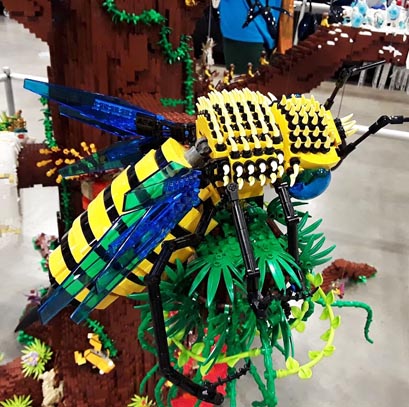 This honey bee has a place of honor on the LEGO "Tree of Worlds". 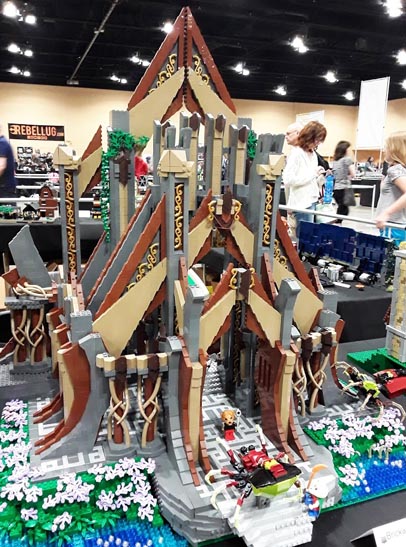 Creatures waiting to get into this impressive, stylized castle MOC, "The Lost City of Fabuland". 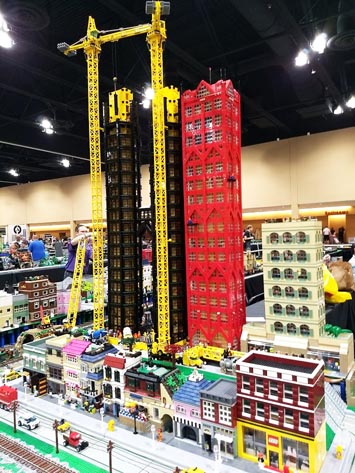 hard to say if these are tall buildings or a launch tower, but impressive, nevertheless. 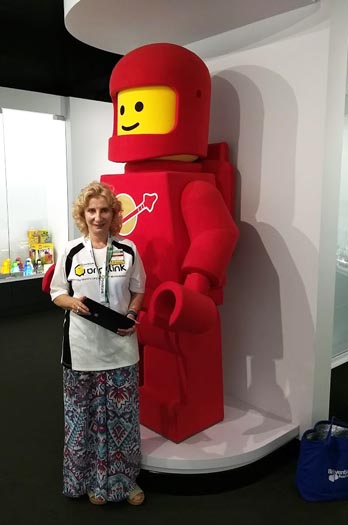 Eliska visited the Blocks to Bricks Museum, a new inspiration by long-time professional LEGO designer and co-founder of BrickWorld, Adam Reed Tucker. His museum covers the history of LEGO, literally from wooden blocks to the system we see today. Here is a link to this terrific museum: BLOCKS to BRICKS 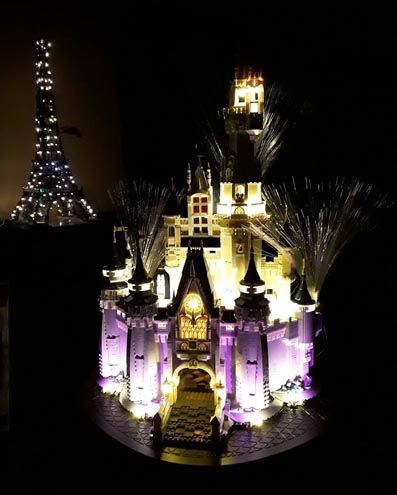 Another impressive creation given special life during late-evening World of Lights. 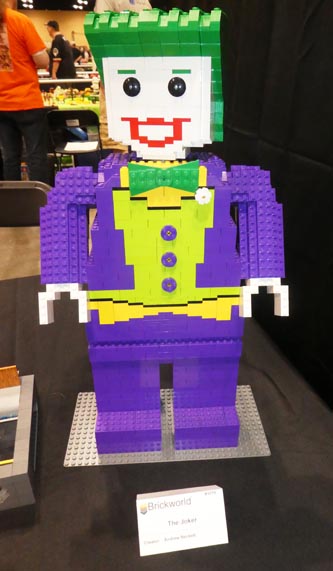 A simple design that is very effective in presenting another version of "The Joker" in LEGO brick. 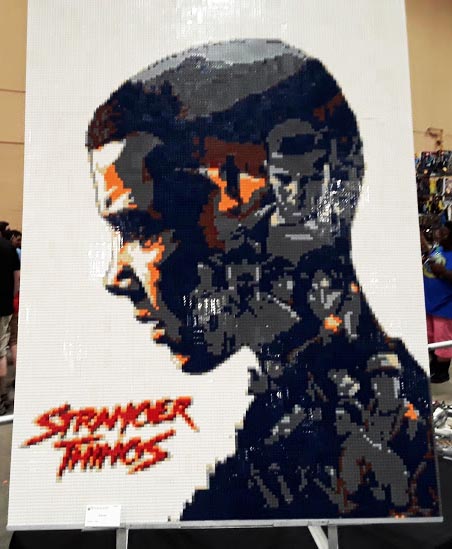 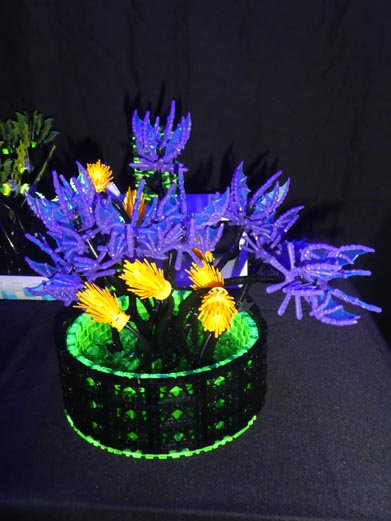 This flower MOC never shown brighter with the lights out than it does right here. 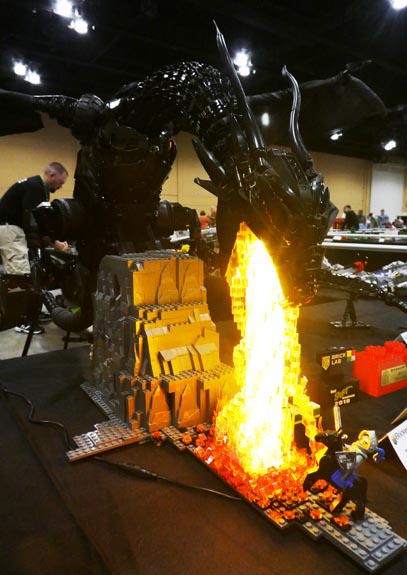 This fire-breathing dragon was even more a hit after dark, during "World of Lights".