LEGO MOCs in Honor
of Dan's Life and Legacy 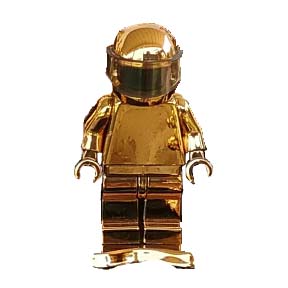 Dan's passing generated expressions of grief over his loss and respect and appreciation of his life and legacy. Here are a few examples of those tributes, most of which were rendered in LEGO itself. 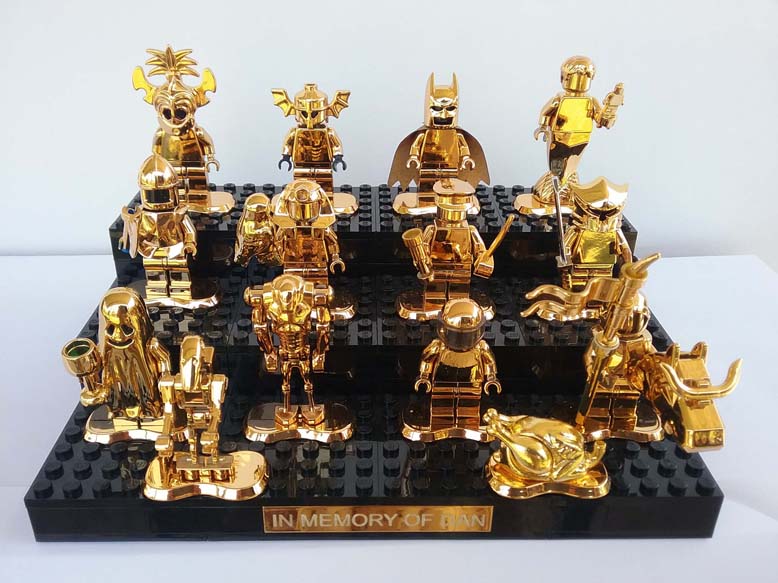 Chrome Bricks, a BrickLink store in Germany, fashioned a tribute to Dan. The multi-platform gathering of minifig heroes showcased Chrome Bricks' penchant for metallic processing of LEGO bricks and was a fitting tribute to Dan and his legacy. Click image to enlarge.

At age 3, Dan completed his first LEGO MOC, a firetruck. It's fitting that the 3rd Battalion International Association of LEGO Fire Fighters (IALFF) named its Station 9, 231 Shady Ridge Road, in honor of Dan, soon after his death. On Oct. 29, 2010 the Engine 12, Tower Ladder 5 and Rescue 3 response team bestowed the honor. "Without Daniel's vision of an internet marketplace connecting Lego buyers with Lego sellers, the Lego Township Fire Department would not be in existence as it is today" read the citation.

Read more about them here, at the Daniel Jezek Memorial Fire House website. 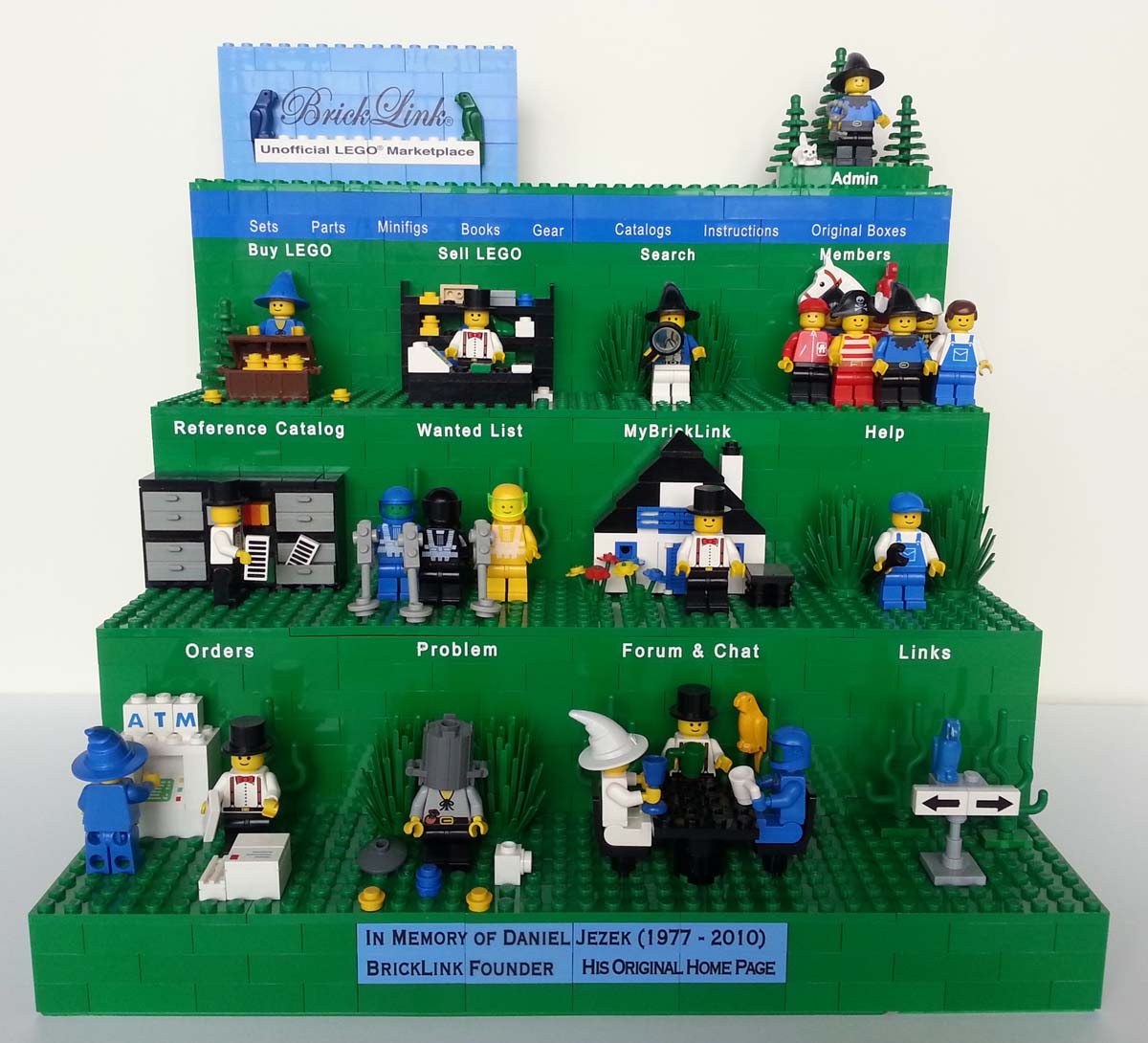 The Original BrickLink Home Page MOC was created by Eliska Jezkova as a tribute and memorial to her son, Dan. It incorporated Dan's own images and icons that he used to illustrate the website and its features. All the icons on BrickLink were in digital form and depicted actual LEGO pieces. However, a number of them only existed in Dan's artistic imagination and had to be created from scratch in actual LEGO. Eliska sought and received advice and assistance from LEGO enthusiasts from around the world. It went through many iterations of design before a completed version was ready. Click image to enlarge. 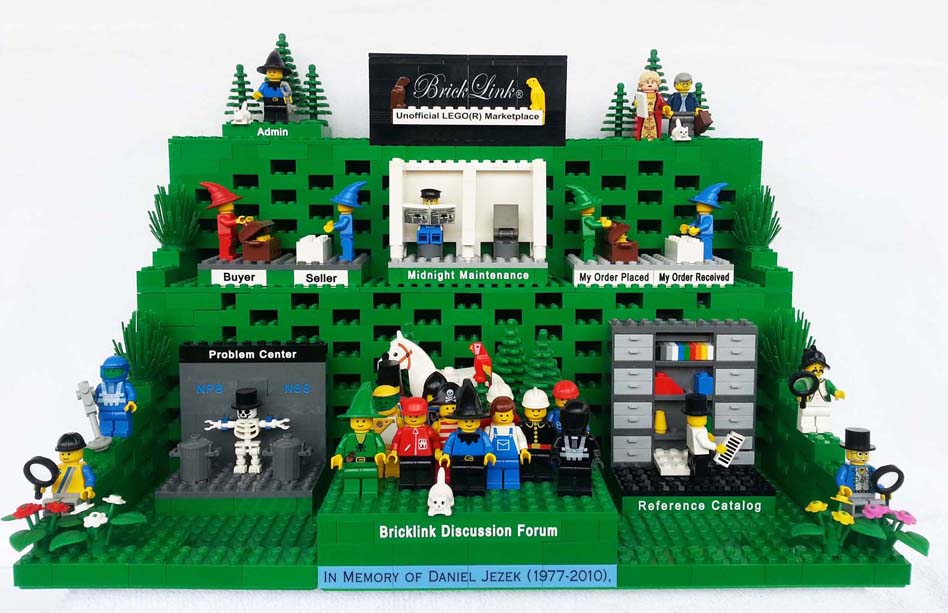 This was a transitional step in the evolution of a final MOC depicting the inside pages of BrickLink. It was remade many times over before it was completed. 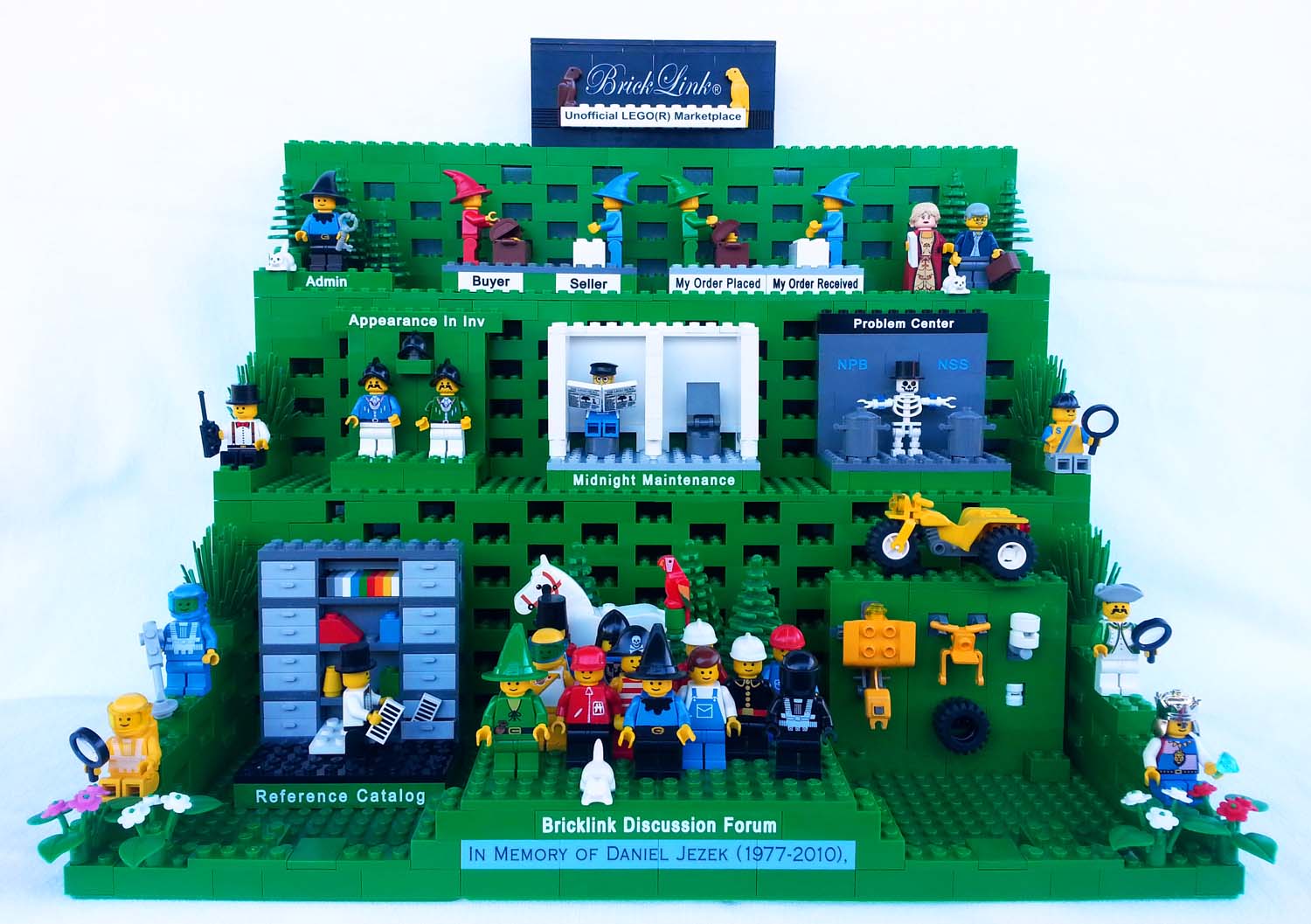 A second MOC illustrates interior panels. Many are still on the website and others (discussion forum, problem center) were retired with the fielding of BrickLink 2.0. Along both sides of the MOC "page" are minifigs representing various ancillary features, such as search, featured, highlighted stores, etc. Click to enlarge. 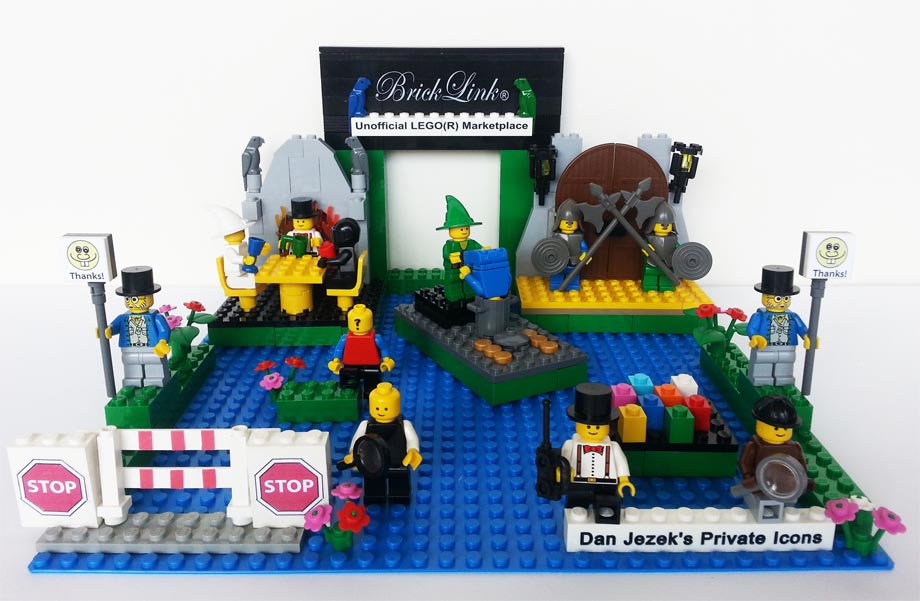 Dan had a working folder filled with icons that were used on various inside, private, admin-only pages. Above are a representation of those icons in LEGO bricks. Interestingly, many of Dan's images were drawn from his love for castle themes. An example is still on the internet in the form of a 1997 published artful review (click here) of a new castle set #6067. He kept these on the inside pages and replaced them on the front page with themes drawn from nature. By the way, that one in the middle rear is a scene of the Admin minifig helping someone out of being stuck in a trash can. The apropos vignette was for the "problem" panel. Click image to enlarge. 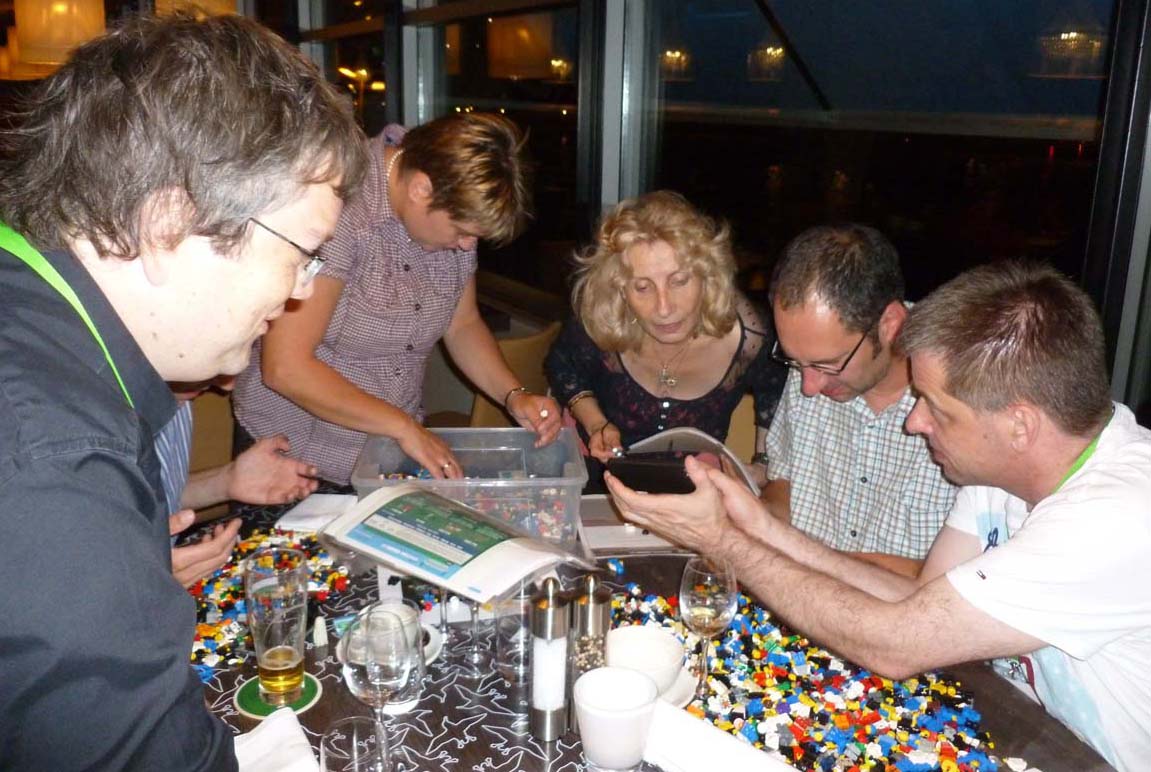 A group of AFOLs gathers to sort thousands of bricks at a BrickLink conference in Holland. Some of the bricks found and identified were later used in memorial MOCs that honor Dan. A comment heard was that if it were not for Dan, "there would be nothing here to sort."

Dan's time growing up in Czechoslovakia was marked by the usual childhood amusements and diversions, among them a love of LEGO and an affinity for computers. But included was an early childhood fascination with a small toy he called "Listitina". Dan was given the toy fox when he was two years old. He named it “Listitina”, which is Czech slang for “little fox”. The two became inseparable and he carried it for 31 years for good luck. The toy lost its coat over the years and was remade in fabric many times. Dan wasn’t impressed with security blankets, toy soldiers or even teddy bears, but that little toy fox followed him everywhere. 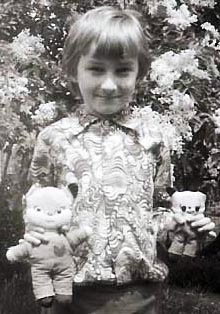 As a young adult, Dan set aside childish things, but still held a place in his heart for his good luck charm, Listitina. When Dan died in 2010, his beloved Listitina, then nowhere to be seen, seemed lost forever. But somehow it did make its way back to the family. A childhood friend from Prague, David Buso, contacted Dan's mother one day. He said he had something important to return to her. It was Listitina. Dan had given his good luck childhood memento to David for safe keeping until his return. Listitina has enormous family significance. Like Dan years ago, Eliska now carries it with her everywhere. In tribute, German LEGO designer Alex Jones (http://orionpax.de/) was commissioned to recreate Listitina in LEGO bricks. In reality or in LEGO brick, Listitina is reminiscent of a time when life was innocent and much joy and happiness was seen in the smile of Eliska’s son, Dan. As you can see below, the design certainly captured the essence of this childhood toy. With Listitina in a safe, secure place, the LEGO version is a staple of the traveling display at various expos around the world. 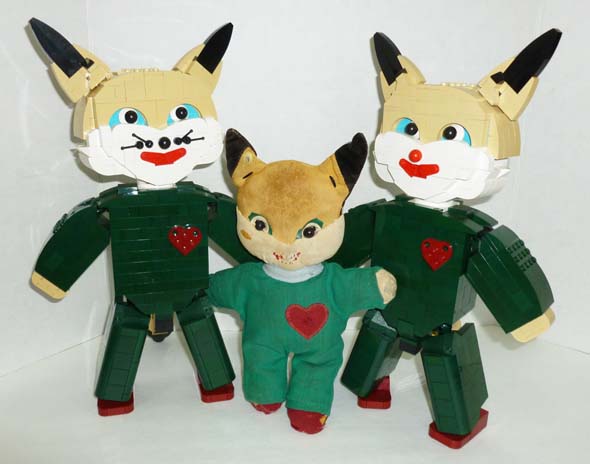 BrickLink Vignettes: The Inside Story

Buyer and Seller minifigs were always a staple of the website and represented features to buy and sell. Dan used red and blue colors when it was still BrickBay, but when he moved to BrickLink he revised the minifigs in green and blue. 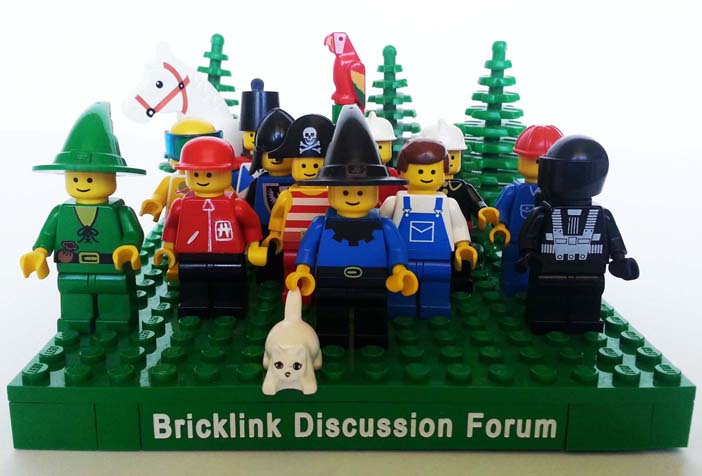 The Forum gathering were actual people from BrickLink that Dan recreated in bricks. The central figure, Admin, was Dan himself with his cat, Felix at his side.

Dan had a sense of humor. His enduring scene for the 15-minute down period each midnight (EST) was a night watchman taking a, er, break. This scene, now rendered in actual LEGO is still used on the website. BL users are quick to defend its continued use. This is the most popular vignette associated with BrickLink. 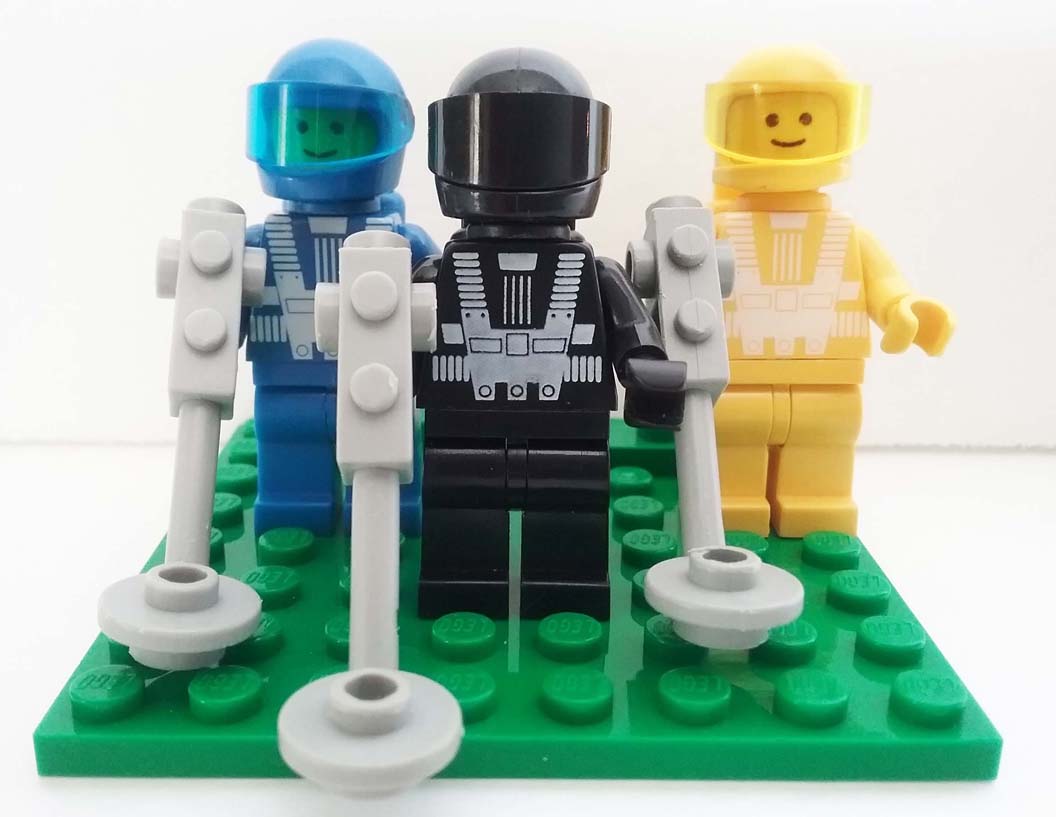 These "Blacktron" minifigs represent the "Wanted List" panel on BrickLink's front page. In reality, the Blacktron minifig piece exists only in black. Blue and yellow were custom made in Australia for use in this MOC.

This "Problem Center" vignette of a man with his head stuck in a trashcan was Dan's first example of the icon used for the panel. On inside pages, he added another vignette of the skeleton and chair seen below.

The Jezek family country house (right), in a small Czech village outside Prague, became the model for Dan's "MyBrickLink" panel (below). 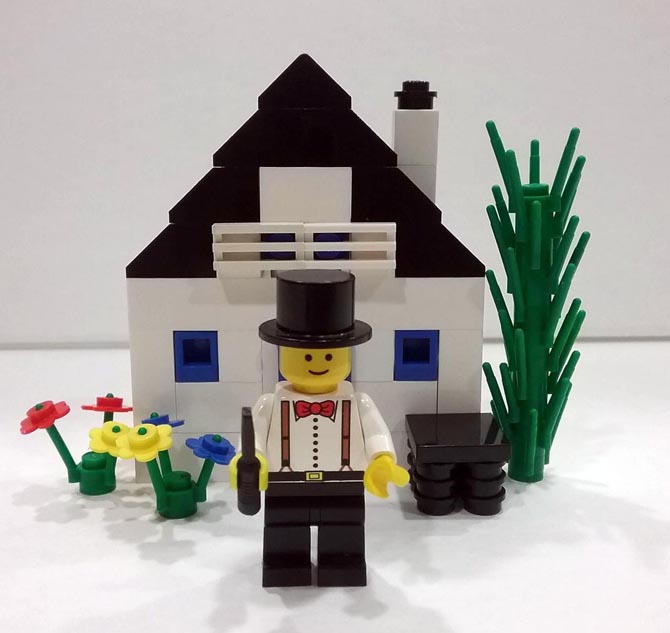 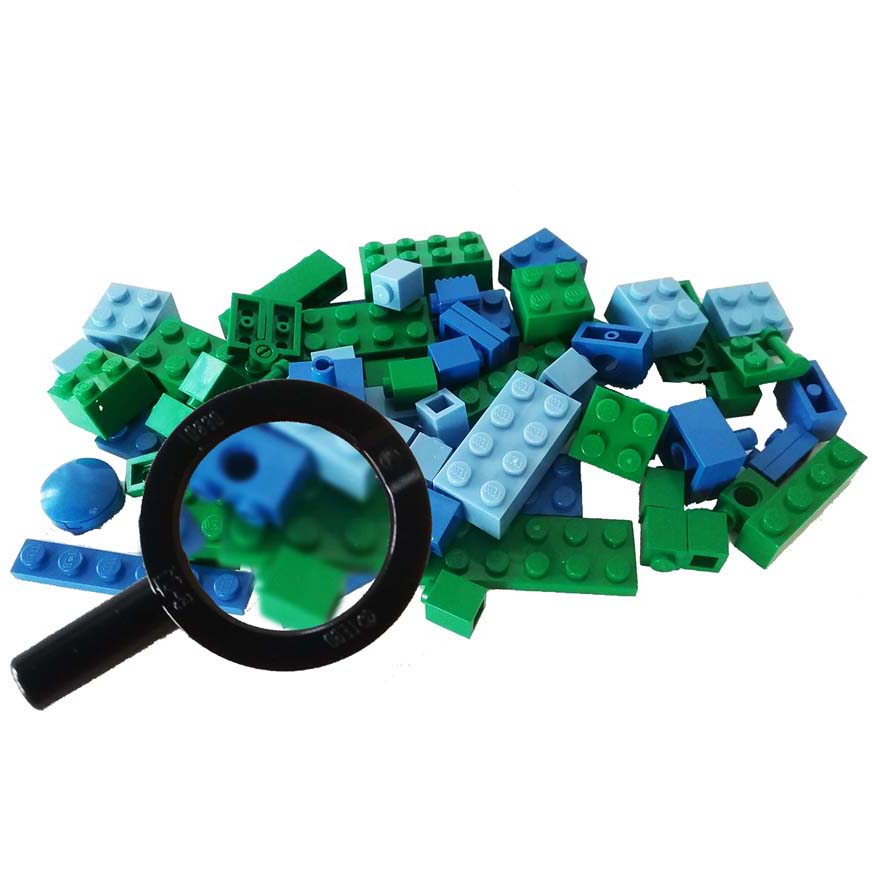