The 2017 edition of Brickvention, in the heart of Melbourne and again hosted in the Royal Exhibition Building, was another noteworthy success. Now entering its second decade, this 11th annual LEGO convention and exhibition drew tens of thousands to view the work of nearly 300 exhibitors, designers and builders during a three-day run, January 13-15. The annual gathering in honor of the brick was once again sponsored by the local Melbourne LEGO users group – MUG – and this year's event attracted more visitors, vendors and builders than ever before. We were especially honored to be among Brickvention's official "supporters" (sponsors) this year, in the name of danjezek.com. Organizers paid tribute to Dan and his creation, BrickLink, "without which Brickvention would not be possible". It was truly a wonderful three-day event with hundreds of displays in the sprawling and historic (circa 1880) building in the heart of one of Australia’s most inviting cities.

Brickvention 2017 played host to John Peddie, known locally as the man most responsible for bringing LEGO to Australia. Originally of Belfast, Northern Ireland, Peddie was sent down under in 1962 to spread word of LEGO. His journey was supposed to have been temporary, but once his mission began, Peddie remained. Acting as a traveling salesman of sorts for LEGO, eventually in 1983 Peddie was appointed head of the LEGO centre, Birkenhead Point, New South Wales. At the time, Birkenhead Point was the only LEGO dedicated store experience worldwide and crowds flocked from every corner of Australia to experience a chance to enjoy and hopefully take home the coveted brick.

Also speaking at this year's event were Jason Allemann and Kristal Dubois, owners of JK Brickworks. The Canadian couple presented a how-to course on LEGO robotics and technical and interactive builds. Jason is the proud designer of the LEGO ideas set 21350 "The Maze".

Capping off the event was a Saturday night cocktail party with plenty of hi-jinx and Australian good humor, for all to enjoy. 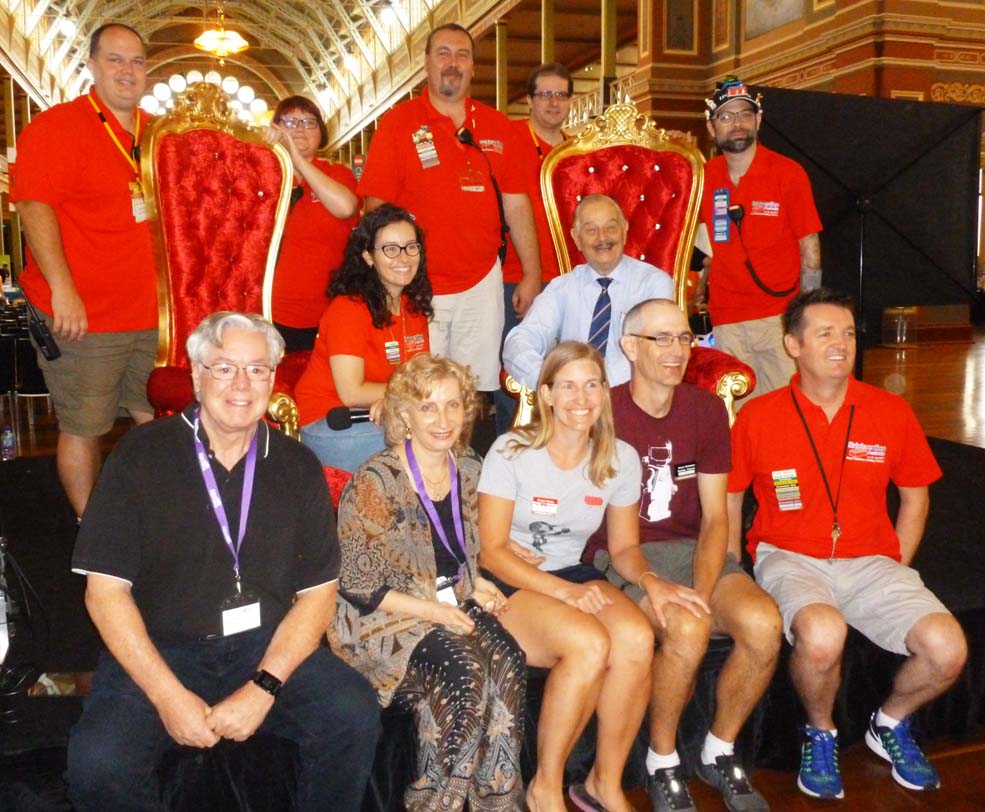 Sponsors, speakers and organizers gather briefly for the obligatory group photo at the three-day LEGO convention, Brickvention. Eliska and I are front row left, next to Kristol Dubois and Jason Allemann of JK Brickworks. Second row, right is John Peddie, the man given most credit for introducing LEGO to Australia and New Zealand. 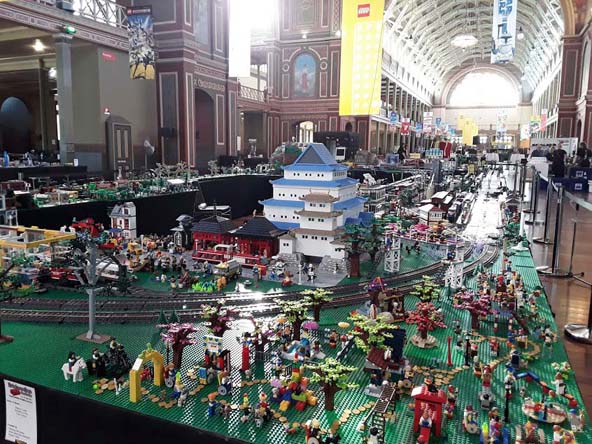 The stage is set for the 2017 Brickvention in Melbourne, Australia to begin. The doors are about to open welcoming huge crowds Downunder as so many LEGO AFOLs and their familes hunger for the brick. 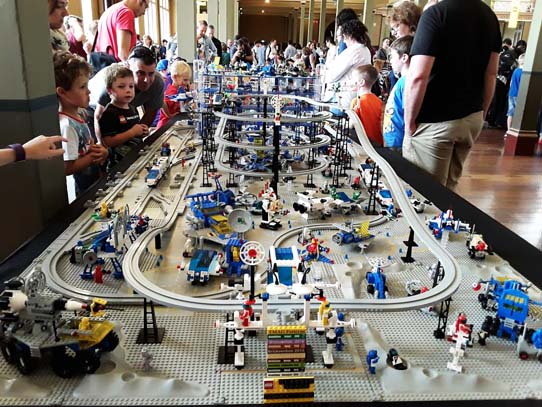 A hands on racing MOC (above) had the full attention of both kids and adults during the Expo. The colorful MOC (below) was an attraction that appealed to plenty of young AFOLs in training. 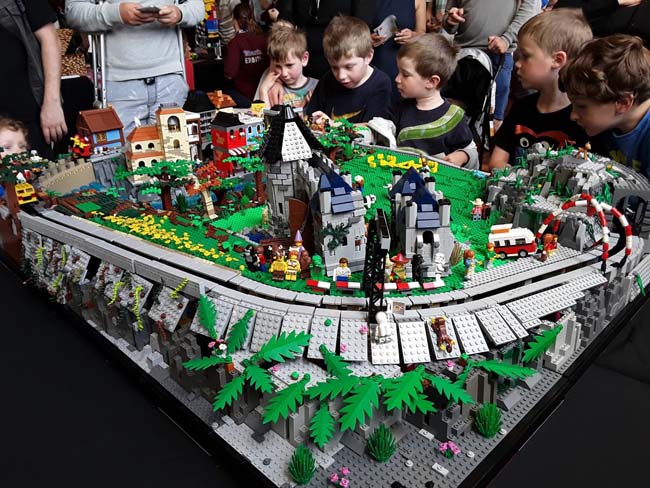 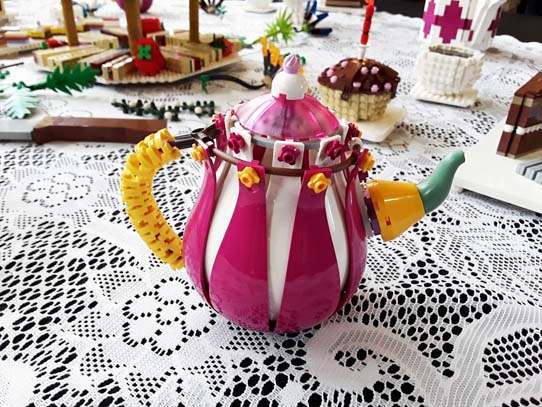 Two MOCs had epicurean themes. One recreated a tea party completely out of bricks and the other a typical wine and cheese tasting. Their realism had exhibit visitors licking their lips and planning their lunch. 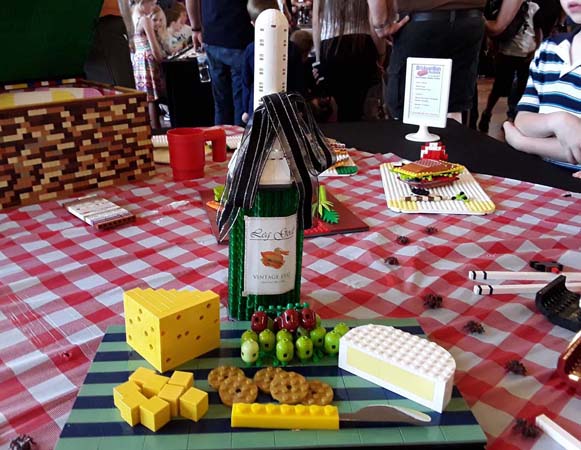 This champagne and cheese MOC was the creation of Dianne Winbanks and daughter Lauren. 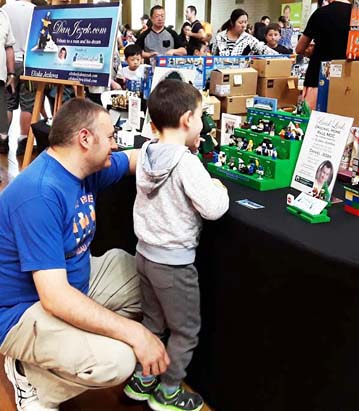 Kids were enthusiastic about Eliska's display. It was interesting that so many actually knew about BrickLink and, of course, with the help of their parents were steady users. With an explanation gained from years of his own personal experience, this father passes along to his son an important LEGO legacy: The story of Dan Jezek and his dream of BrickLink. 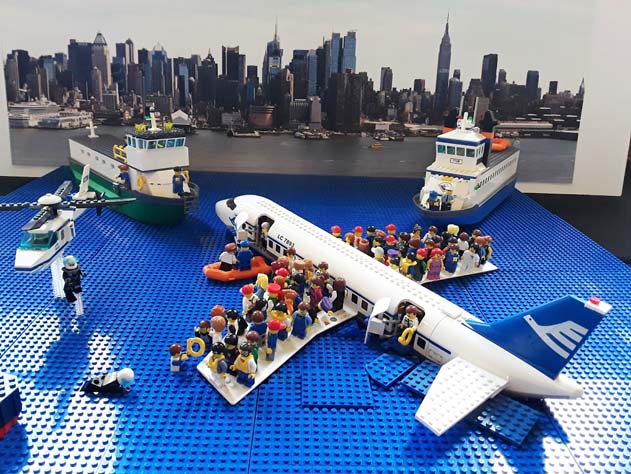 This MOC recreated the "Miracle on the Hudson" emergency landing in New York, Jan. 15, 2009. All 155 people abord US Air Flight 1549 were rescued and successfully shuttled to dry land. 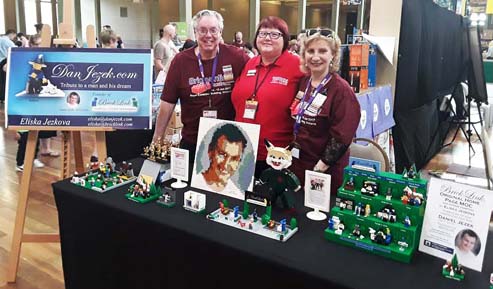 At our display, we visited with Sue Ann Barber, one of the primary organizers of Brickvention and a member of the Melbourne LEGO Group that runs the event each year. 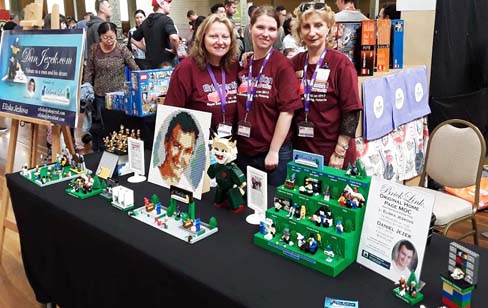 We were honored and humbled to be presented a LEGO mosaic in honor of Dan Jezek from Dianne Winbanks and her daughter Lauren. The two collaborated on the mosaic design which required more than 2,000 bricks to create. Their theme for the project was that "Dan made LEGO and now LEGO makes Dan." 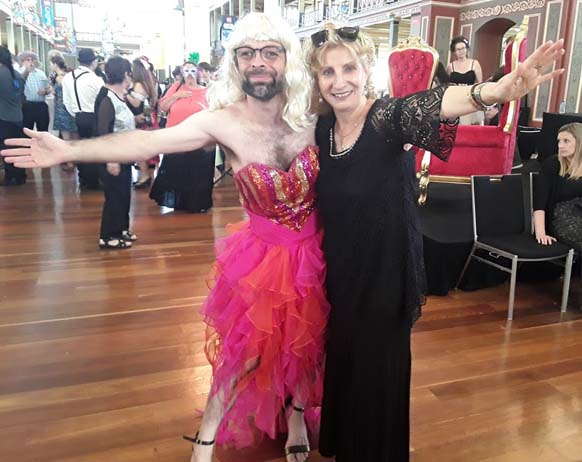 The Saturday night cocktail gathering has become a traditional part of Brickvention. Organizers, supporters, builders and designers let their hair down and participate in a humorous program of hi-jinx and comedy. The custom is to dress as outlandish as possible and make the most out of a raucus evening of laughter and hors d'ouvres. Eliska joins with Travis Matheson who certainly knows how to make the most out of a costume from de-centralized casting. 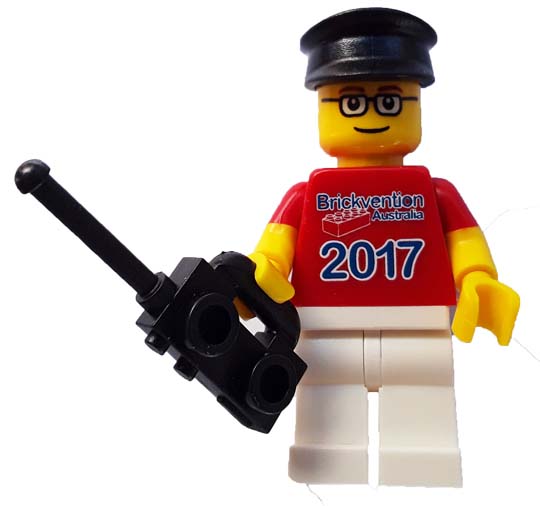 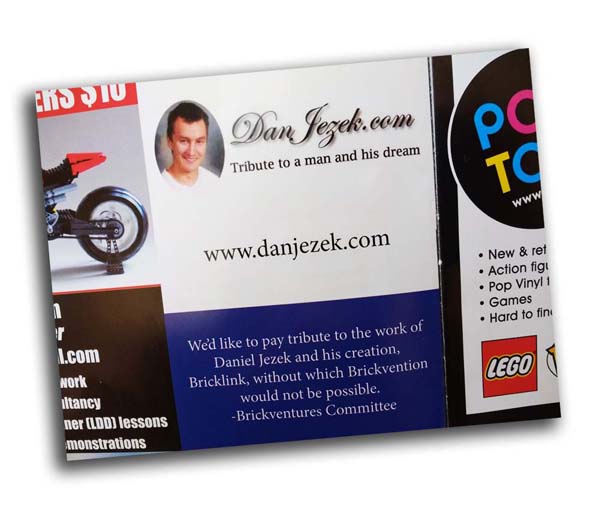 We were honored to be able to co-sponsor Brickvention 2017. This section of the official program mentions the tribute to Dan and his dream, BrickLink: We'd like to pay tribute to the work of Daniel Jezek and his creation, BrickLink, without which Brickvention would not be possible.

The Mission to Bring Bricks Downunder 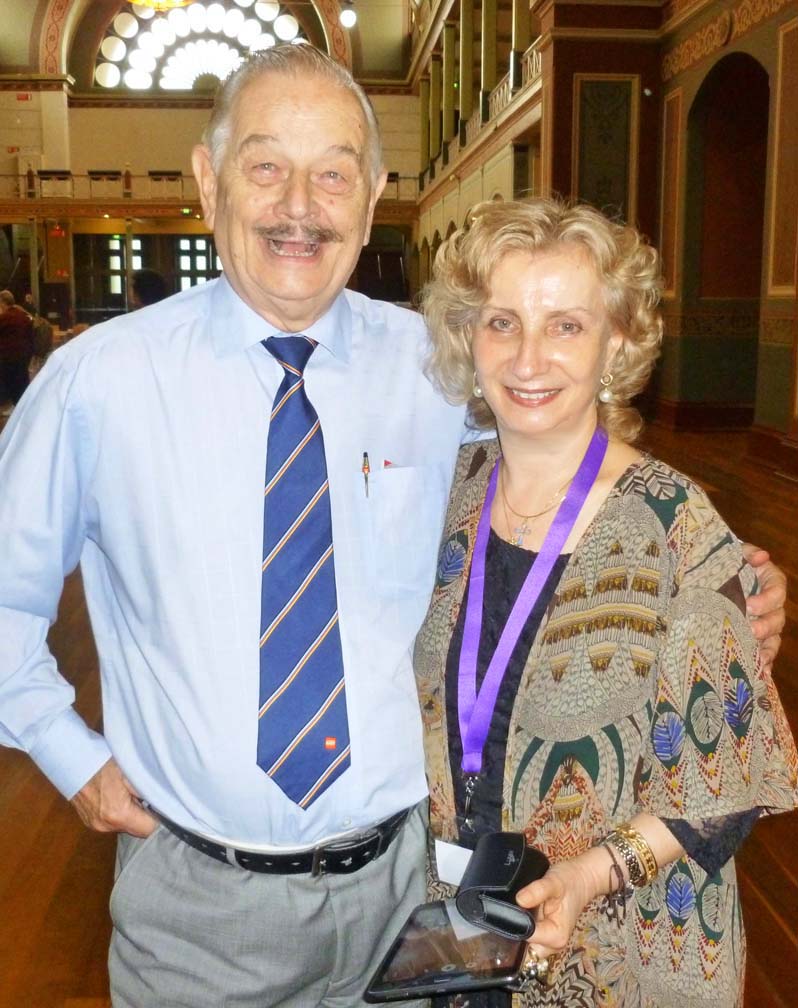 John Peddie with Eliska Jezkova. Peddie has served as director of the Australian Toy association and been inducted into the Toy Industry Hall of Fame. Since 2011, the annual award to the most oustanding LEGO employee in Austrlia and New Zealand bears his name. 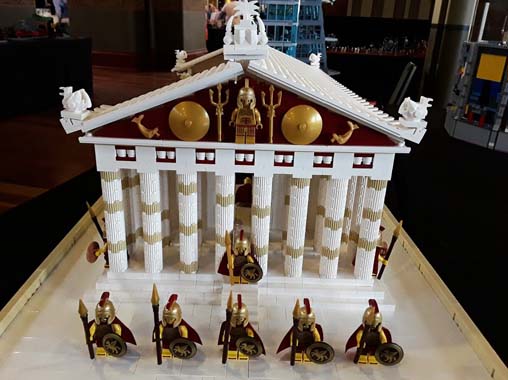 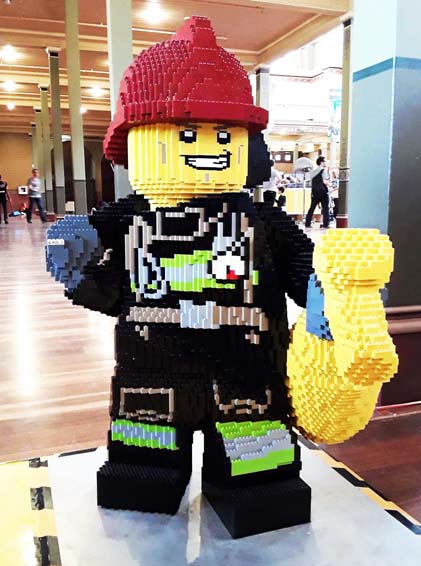 One of Melbourne's finest in LEGO. 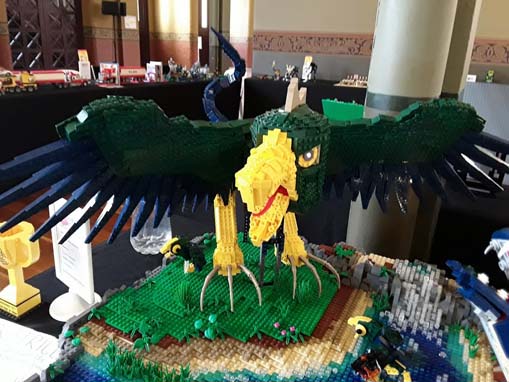 This bird of prey MOC was an award-winning design. 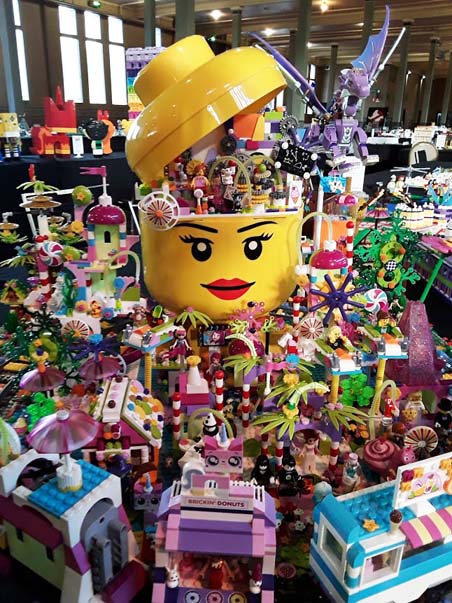 This colorful MOC was named "Inside my Imagination." 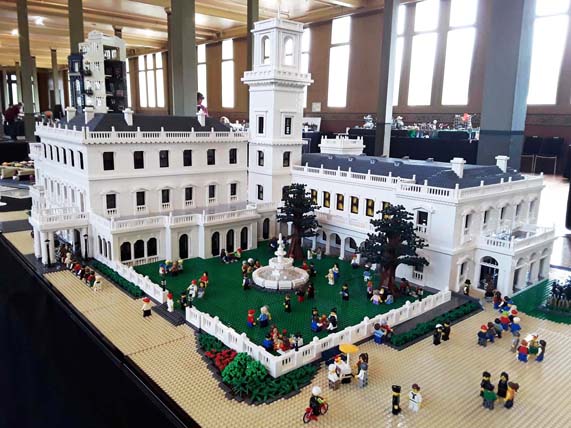 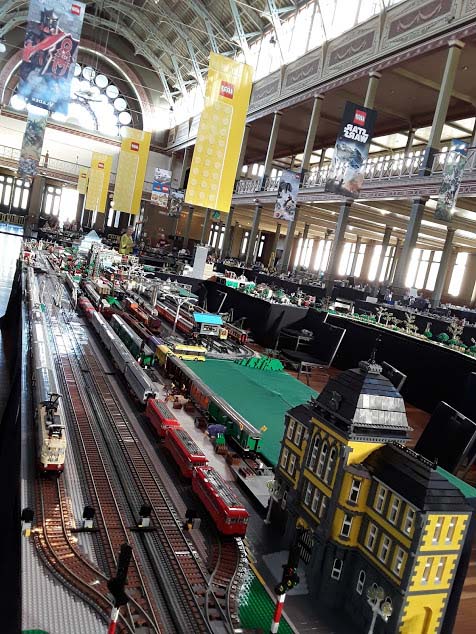 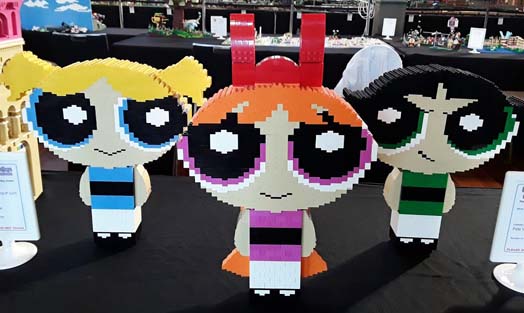 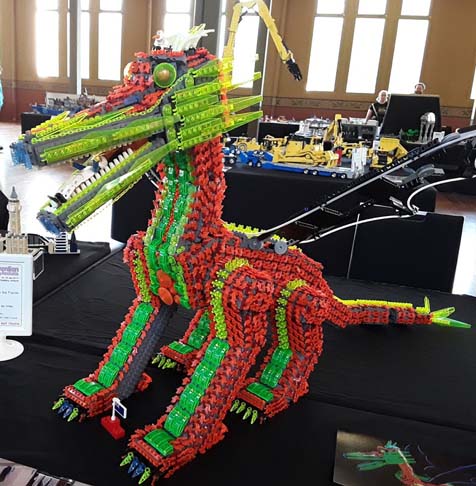 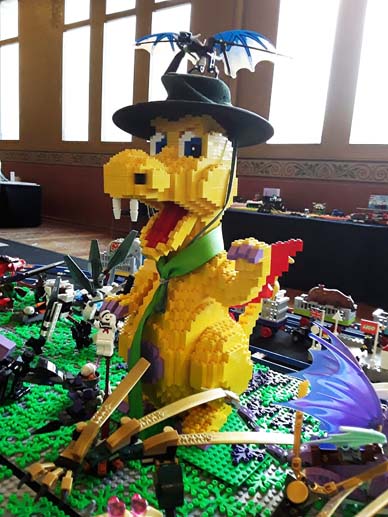 Creative to be sure, but this fictitious animal defies description. 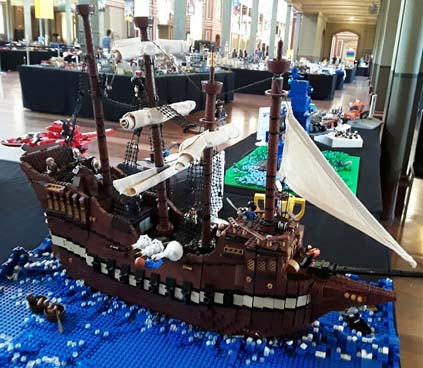 No exhibit is complete without a pirate ship or two. 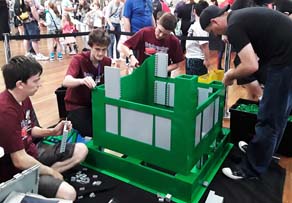 An on-site build (above) on the last day of the convention/exhibit was finished just in the nick of time before closing. Oh, so it's a phone booth (iPhone no less) made of green LEGO bricks. Nice work, to be sure and in such a short amount of build time. 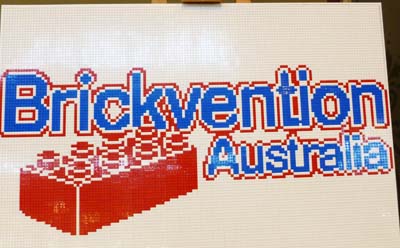