Brickworld 2017 braved a few cloudy skies and wet weather to attract another large contingent of professional and public Adult Fans of LEGO to the Schaumburg Renaissance Hotel Convention Center once again. Although the rainy weather influenced sheer numbers -- this year attracting a slightly down-sized crowd of about 10,000 -- it did nothing to dampen enthusiasm of Chicago-area waves of public visitors, exhibitors and vendors. The Friday night charity auction generated the best bottom line return ever, with about $28,000 raised for worthy children's causes and programs, many involving LEGO. The annual bid-war to secure a copy of Eliska's replica of the original homepage was won, again, by BrickLink.com who added a $3,000 donation to the charitable total.

In the Expo Area, Eliska again displayed her original front page MOC and memorial to her son, Dan Jezek, who founded BrickLink in June 2000 and who died in 2010. For the first time at Brickworld she also had on exhibit the memorial mosaic that was presented to her earlier in the year, at Brickvention, in Melbourne, Australia. The mother-daughter duo of Dianne and Lauren Winbanks designed and built the mosaic in honor of Dan and all he did to promote AFOLs and LEGO during his life.

Jaclyn Cowan of BrickLink.com, with Eliska Jezkova and Larry Hawthorne at the display commemorating Dan Jezek, founder of BrickLink. 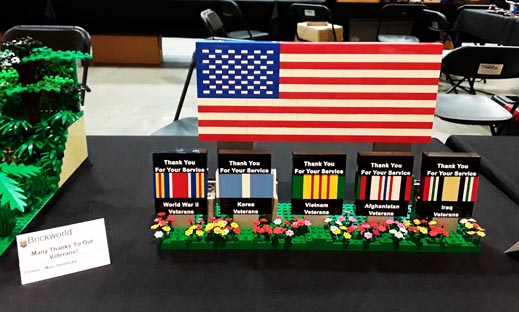 A MOC in honor of veterans spans America's battles, from WWII to Korea, Vietnam, Afghanistan and Iraq. 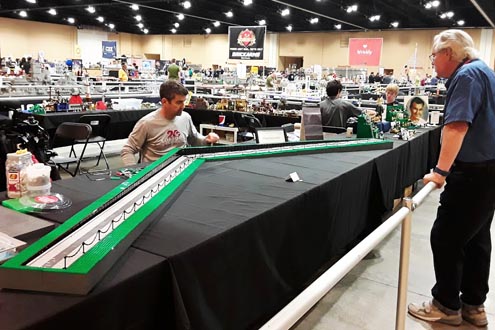 A Vietnam veteran looks on at a MOC of the Vietnam Memorial Wall in Washington, DC. The names of 58,272 of the fallen are memorialized there on a permanent roll call of honor. 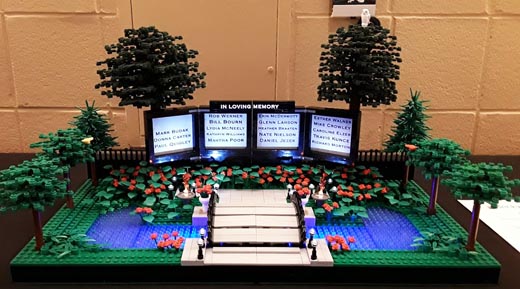 This MOC was the personal creation of Bryan Bonahoom, Brickworld co-founder and organizer. It honors those now passed on, who made an impact on Brickworld during their lives. A few, like Daniel Jezek, never attended but had a major influence on those who did.

"Octan Park" a fictitious baseball stadium adhere's closely in feature and design to actual stadiums in use today. 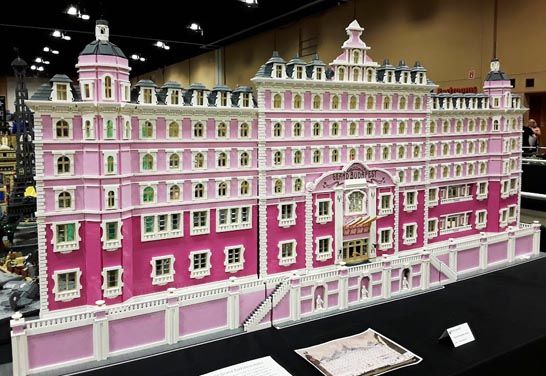 The Grand Budapest Hotel starred in its own popular comedy motion picture and has spawned several spin-offs including this MOC designed and built in its honor.

Real bricks in the image of real people make up this cinema crowd. 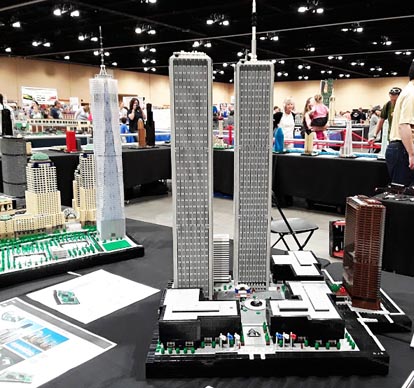 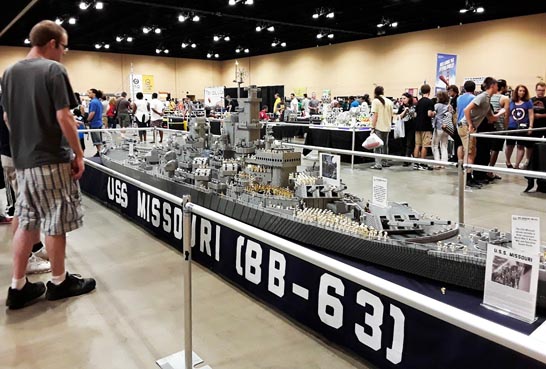 The USS Missouri, where the end of World War II was consummated with signing of an unconditional Japanese surrender, is reproduced in LEGO bricks. 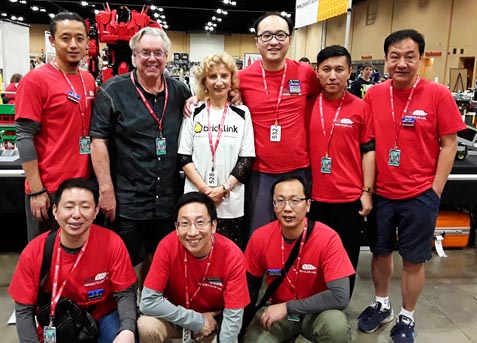 We gathered for a photo with a group of Chinese mainlanders, their LUG visiting Brickworld for the first time. 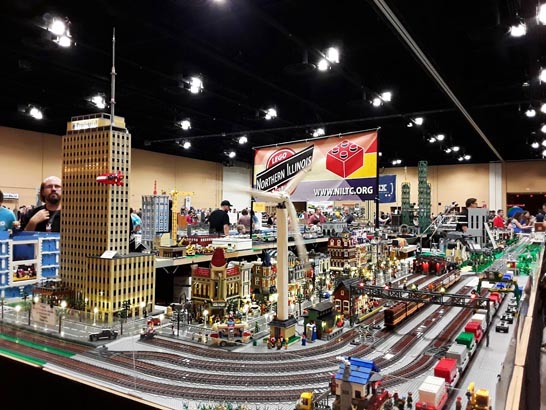 "The Northern Illinois Railroad" is represented here with this MOC. 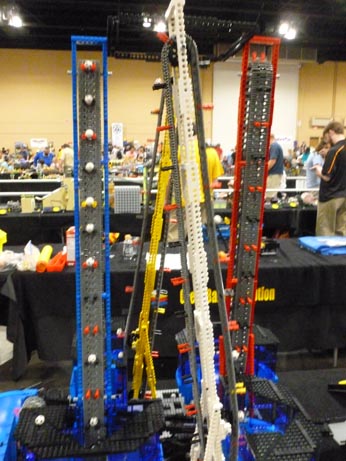 What would Brickworld be without at least one Great Ball Contraption. This version was more than two football fields long and at one point kids were enlisted to propel the balls along their track.

We were honored once again to serve as a Red Plate sponsor for Brickworld 2017. 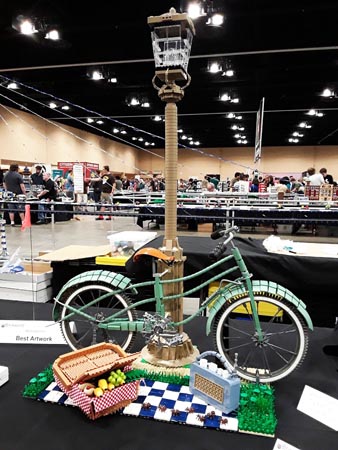 A very real-looking bicycle made of bricks. 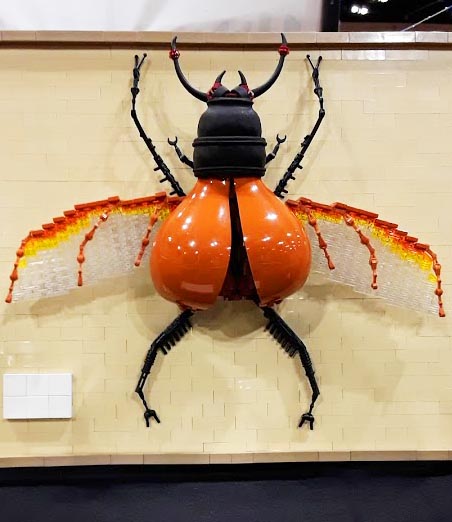 This creepy crawler won the prize for "best creature". 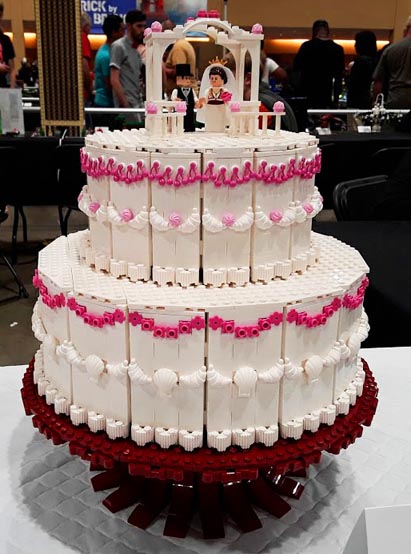 The frosting on this MOC does look good enough to eat. 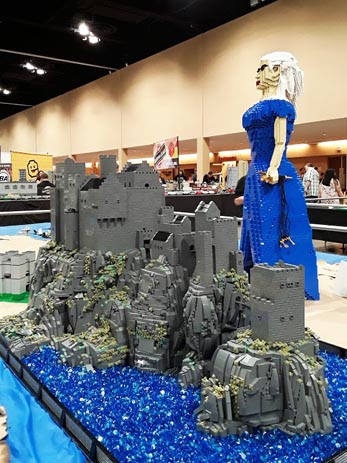 "Brick of Thrones" HBO would be proud.

The "River Wheel" MOC was a ride worth remembering. 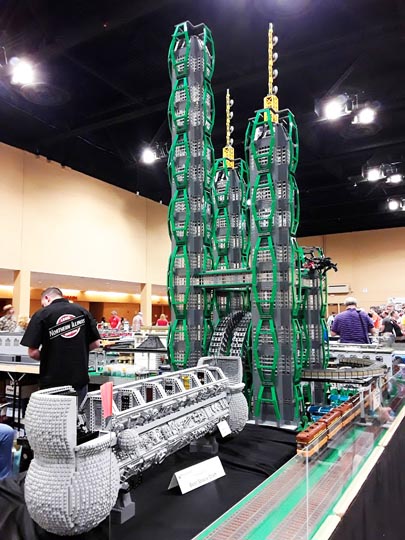 This fantasy space station was marked by its impressive detail.

A mosaic of Jesus Christ funded and sponsored by Benet Academy Campus Ministry. 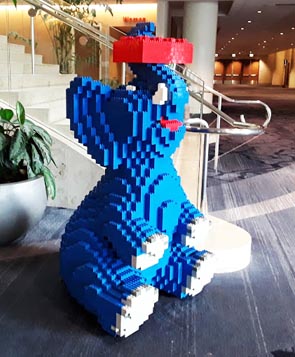 The welcoming committee for Brickworld 2017.

A final salute to all who attended on the way out of the conference center. 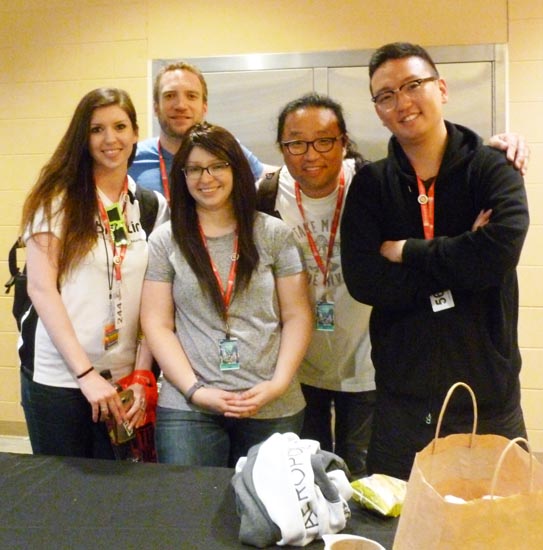 The BrickLink.com contingent unveiled new, beta software called Mosaick and demonstrated the way it creates ready-to-build mosaics with a simple digital photograph. It will generate a parts list as well. It's free and available now on bricklink.com. L to R: Jaclyn, David, Sheryl, JY and Lincoln.