A Military Ambush in LEGO Brick he never saw coming! 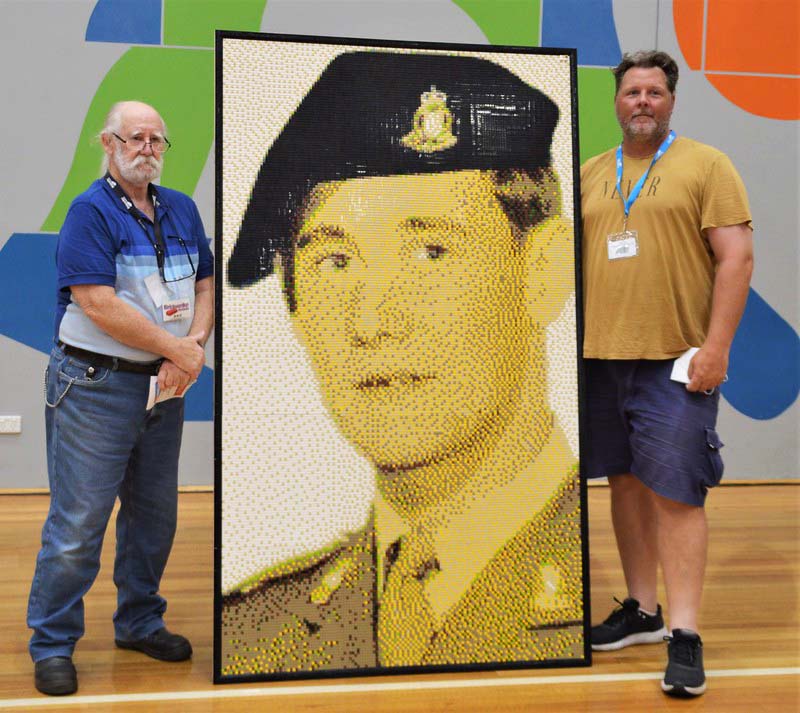 Alec Mead (left) is the subject of the huge mosaic that took Justin Cranston (builder, right) two years to complete.

How many of you thought that was a younger Prince of Wales, Charles himself in his military best. Nah, too much drama that one, but that young military lad is none other than Alec Mead, photographer extraordinaire and now retired military. Here's how it came about in Alec's own words:

It was a portrait picture taken of me when I was 19, just before I went to Vietnam. The idea was, if I didn't come back, or parts of me didn't come back, at least the family would have a memento of what I used to look like. The culprit who created that mosaic is Justin Cranston, (also pictured). Apparently he came up with the idea a few years ago, to pay tribute to Veterans for their service, & seeing I was the only Veteran he knew, he used my Photo for the template. It took him a couple of years to do it, (the enormous amount of 1x1 studs required and Covid for two years), which meant this year was the first chance he had of displaying it and gifting it to me. Lady Hellie knew what was going on but said nothing, several others also knew but kept it secret. Helen and I were both at Brickvention on that Friday. I was taking photos & she was enjoying all the builds, when I got a call from another friend, Steve Reynolds, to say he needed some help. I bolted from where I was, got to Steve's display, (I thought maybe someone had knocked it over), but he said, 'no, I don't need you here, I need you over there'. So we both hotfooted it over to where this huge piece of plastic was covering something. I still did not have a clue & was asking, 'where's the problem, who needs help'. They then maneuvered me over to stand beside this display and Justin started talking about friendships, service, etc, but I hardly heard a word, I was gobsmacked. And in my usual inimitably fashion, during what I'm sure was a lovely speech by Justin, said, 'what the heck is going on here'.... The rest as they say is History . . .

Well, Alec, you deserve to be honored and memorialized in LEGO brick and thank you for your service, not just to Melbourne LUG and Brickvention, but to your country as well.